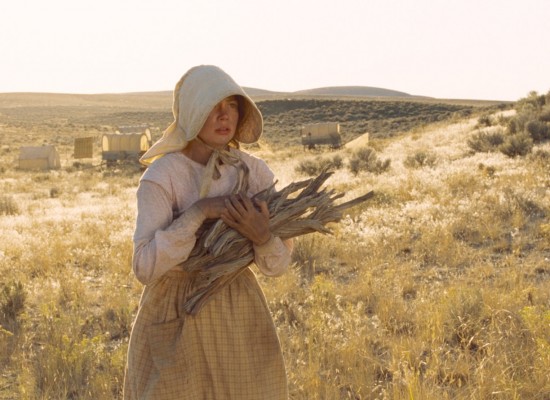 At first glance, Meek’s Cutoff seems like an experiment in devising a Western out of the minimum possible number of elements. It features three wagons, two guns, one Indian, and one guide. It follows a journey that begins nowhere and ends in roughly the same place. The story is simple. The year is 1845. Three families heading to Oregon have broken off from their wagon train and put their fate in the hands of a trapper named Stephen Meek, who has promised them a shortcut to their destination. When the movie opens, the party is lost in the desert and running out of water. A group of men discuss what they should do. Are they planning to mutiny against Meek? Do they trust themselves without him? It’s barely possible to hear what they are saying. The sound design forces you to strain to hear each individual word. After a moment it becomes clear what’s going on; we’re with the women in the camp, eavesdropping in the dusk.

That feeling of indeterminacy stays through the whole movie. Everything in the human dimension of the film is muted or muffled in some way. Faces are hidden inside tall bonnets or concealed behind beards. Dialogue, for the most part, is kept bone spare. Stephen Meek is the group’s biggest talker. Played by Bruce Greenwood, he’s a shaggy mound of useless braggadocio, Davy Crockett as Baron Munchausen, the mountain man myth and its lie. Intermittently he cuts in with tall tales and weird pieces of cosmological wisdom: “Women are created on the principle of chaos… men are created on the principle of destruction.” At other times he admits to being a ruthless Indian killer, who chased his enemies into a lake and shot them in the back. 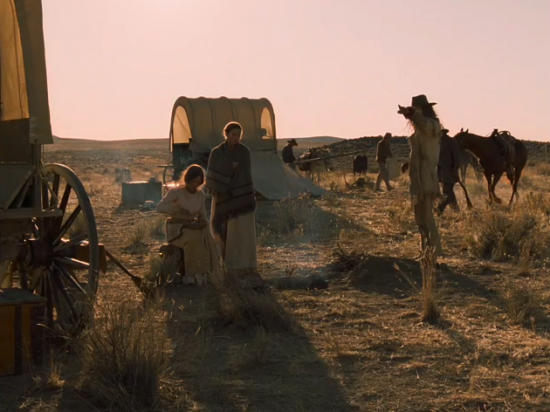 The least talkative member of the group shows up midway through the movie. He’s a Cayuse Indian (Ron Rondeaux), who first shows up as a half-glimpsed shape on the horizon. One morning, he’s suddenly standing by one of the women, Emily Tetherow (Michelle Williams), while she’s gathering firewood. She fires a shotgun in the air in panic and the men ride off to capture him. After they bring him back he is the loaded gun on the table. Meek wants to kill him. He says the Cayuse are outcasts and thieves. Emily’s husband wants to recruit him to help the party find water, which is perilously close to running out. They resolve to keep him. Paul Dano even offers him a blanket for his services.

The Indian — he never gets a name — doesn’t speak, except for a few words in his own language (Cayuse is extinct: I’m not sure what language they used in its place). Bound with ropes, he leads the few wagons towards something, but it’s impossible to know to what. At moments of rest, he draws on rock faces. His presence acts differently on different members of the party. Some see sinister intent in the blazes he leaves by the side of the trail. Emily tries to find a way to earn his trust, or at least gratitude, by mending his shoe and bringing him food. Meek keeps harassing him. Several times he comes close to murder. When one of the wagons overturns he pulls a gun on him. Emily’s defense of him is the one true event in the movie, a moment whose intensity flashes like lightning on the screen.

More often, the feeling of Meek’s Cutoff is of incremental progress towards a point unknown. Its open-endedness can be frustrating. Reichardt keeps us groping, giving the barest window into individual motivation and only the slightest hint of resolution at the ending. But the minimalism of Meek’s Cutoff has a purpose. The space and stillness in the movie force attention away from the human figures and onto the landscape that engulfs them. The Oregon High Desert, where it was filmed and which the historic Meek’s Cutoff crossed, is the real subject of the movie. The desert, really an arid, grassy plain, fills every shot (all beautifully composed by cinematographer Chris Blauvelt). It is endless, burning hot and monotonously flat and constantly changing with the angle of light and time of day. The sheer physical immensity of this space threatens to hijack everything else in the film, and it’s a testament to Reichardt’s directorial intelligence that she lets it, and that she makes it work as part of a larger project. 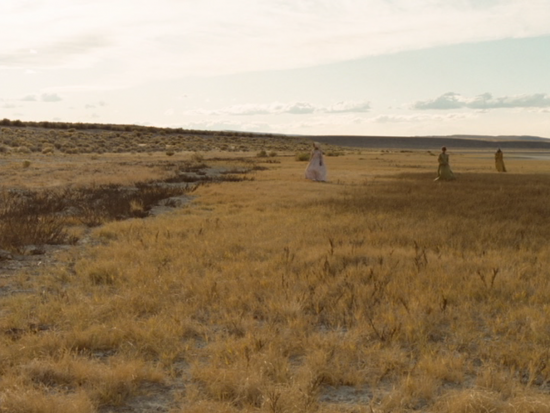 Every Western, in one way or another, tries to tell the story of America in miniature: civilization (one kind of civilization) coming into the wilderness, changing it, and being changed by it in turn. Usually it has to do with some kind of foundational violence, the moment when theft creates property and murder gets ratified as justice. There’s a clear, revisionist thrust to Meek’s Cutoff: it shifts the frame away from men and onto women and Native Americans. The sound that stays with you for the duration of Meek’s Cutoff is the high-pitched squeal of wagon wheels straining against their axles. It’s a fitting soundtrack, since more than almost any other film Meek’s Cutoff makes it clear that crossing America was work — hard, physical, frustrating, repetitive work. Women’s work — washing, laundering, sewing, cooking, caring for animals and children — fills the film.

The date of the movie is just as telling. 1845 is early for a Western, early even for a movie about the Oregon Trail. In a way, it’s before the West came into existence. The settlers haven’t arrived yet and the tribes have been shattered by disease. The Cayuse War and Whitman Massacre hang in the future. History hasn’t started yet; for the moment, things could go either way. This state of suspension carries both the threat of slaughter (and since we know how things worked out, it’s practically a promise) and the potential for solidarity. This slim possibility is contained in the wordless relationship between Emily Tetherow and the Indian and its motion from wariness to respect.

The look they share in the final scene, and the sense of recognition it carries, is a utopian gesture. It’s also a bit predictable. The overt politics of Meek’s Cutoff are blameless, but they’re less interesting than the ones implicit in its aesthetics. The High Desert is the movie. It’s a vast, horizontal, un-heroic space, the opposite of the Monument Valley screenshots and Sierra Nevada mock-ups which have dominated the genre since the ’50s. Its sheer beauty takes over the film, and I think there’s something powerful in that. There’s a reason they make national parks out of canyons and redwood forests: our reverence for fruited plains and purple mountain majesties goes right back to the 18th century invention of the sublime as the remote experience of terror. Reichardt’s film rewires the way we look, and suddenly this big flat place goes from wasteland to vision.

In most Westerns, the landscape is a backdrop, a stage on which men pursue each other with guns. Sometimes it stretches out to become something else. In The Searchers, the whole continent becomes a maze with a girl at its center. In Meek’s Cutoff the landscape swallows the screen: the desert itself is a labyrinth where everyone is lost, and even the Indians can’t find their way.