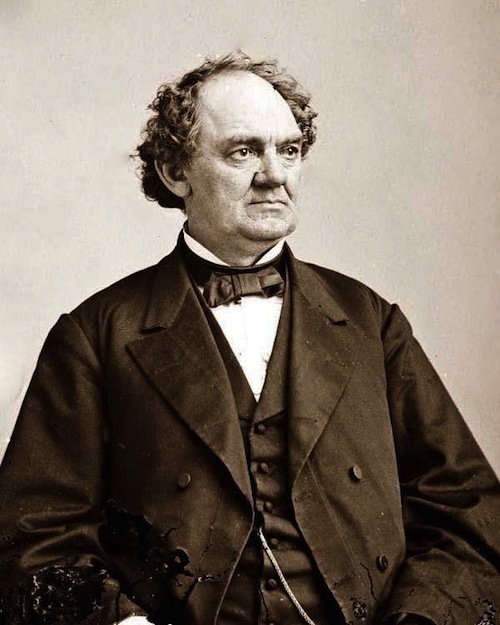 In 1842, America’s baron of ballyhoo, curator of curiosity, high priest of hokum, P.T. BARNUM (1810-91) himself, challenged visitors to view his “Feejee mermaid,” if they dared. Barnum’s provocation: the experts could not agree whether the mermaid was true or false, a miracle of nature or a trumped-up fake. “Who can decide when doctors disagree?” You, that’s who. The general store owner’s son turned showman captured the antebellum zeitgeist when he empowered everyday people to solve the mysteries science hadn’t yet caught up to. He also empowered them to choose to be fooled, for a fee, for the pleasure of proving themselves smarter than the doubters. The Feejee mermaid was really a fish tail joined to the top half of a monkey — but there were never definite answers at Barnum’s productions, only a sleight-of-hand that slid investigation into wonder. Neil Harris calls this Barnum’s “operational aesthetic,” the trick of making debating possible answers the point of the whole show. But at Barnum’s dime museums, vaudeville shows, circuses, and parades, there was never any confusion about who was in charge. “This Way to the Egress,” read a sign in Barnum’s American Museum in New York. The visitors hoping to see a wonder of nature called an egress instead found themselves out on the street, ready (or not) to buy another ticket.

On his or her birthday, HiLobrow irregularly pays tribute to one of our high-, low-, no-, or hilobrow heroes. Also born this date: Jean Cocteau, Chuck Close, RZA.