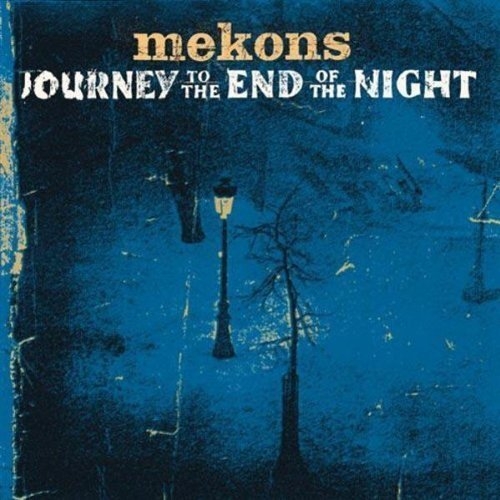 “Continuing on our way through Sicily…” A literary band can lead off an album that way (“Myth”): in medias res, reasserting their collectivity, and inviting us along with them, wherever their punk-folk peregrinations might go. I had joined around 1989, when The Mekons Rock ‘n’ Roll was released.

Journey to the End of the Night was released a few months into Y2K, after we had ushered in the new digits without global collapse. To think, now, how much fear we channeled into our little computers… What did we know from fear then? There would be ample time for fear later on, when we’d live life protractedly in “an accident / caused by the government” (“Tina”). I heard Mekons play the Bowery Ballroom the week that Journey came out. I remember the gig in particular because Sally fell ill just as “The Ballad of Sally” began, and rushed offstage, leaving Jon to sing her part.

This album didn’t plunge me into existential despair, which speaks to the tracks — many propelled by a driving beat — and to the largely carefree time of my life in which it made its appearance. Just before the record was released, I broke up with someone. It had been my starter adult relationship. I bounced back quickly: I was still young, and I hadn’t disrupted the fabric of my life for this thing. I had a good job, and acres of time. I wrote. I dated. I danced. That summer, I journeyed alone to The Edge of the World — Newfoundland – and didn’t fall off.

“Something To Be Scared Of” is a transcendently spooky number, but I had literally nothing to be scared of when I first encountered it. Bouncy, cheeky “Neglect” carries the refrain, “Give me ten thousand pounds, pleeeeeeeease.” Its veneer of comedy, today, has worn down to a more naked despair. “Last Night on Earth” is an apocalyptic toe-tapper. These are songs for dancing angst away. That year, my journaled worries had finally been addressed: I would find love! And, I’d be fine when it ended, too.

Also at the Bowery that night, unbeknownst to me, stood the tall, lanky man I’d be spending the rest of my life with. It would be another year before we’d meet, marry, procreate, and survive several of my bouts with cancer together. And, eventually, we’d be part of a backing choir on a Mekons album.

See All Posts by Deborah Wassertzug

Deborah Wassertzug is a translator and writer who lives near Washington, DC.