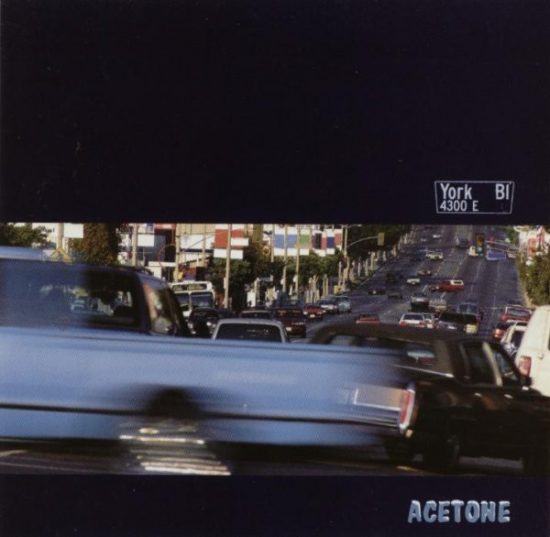 Though I had followed Acetone closely through the Nineties, 2000’s York Blvd. slipped past me until 2003. It was a strange oversight on my part, but it was a strangely appropriate twist of fate. The band’s first album (1993) arrived in time to be part of the soundtrack for the early chapters of my dissertation; York Blvd., their last, finally found its way to me in the summer after I was denied tenure. Bookends, 10 years apart, with regular checkpoints in between.

It is not original to say that Acetone sounds like Crazy Horse playing beautiful Velvet Underground compositions. That’s reductive, but if you imagine Crazy Horse playing “Pale Blue Eyes,” with a big, clean, spacious sound, you will have an accurate idea of what much of “York Blvd.” sounds like. It, like much of Acetone’s music, is exquisite, gentle sadness hooked to a propulsion system that lets it explode into waves of defiance and rage without ever ceasing to be beautiful.

The album leads off with the question, “How long do you go on believing things are gonna be alright?” In 2003, I was asking the same question. As unjust as my tenure denial had been, my family welcomed it as an opportunity for geographical mobility to somewhere we wanted to live. The handcuffs I’d doggedly pursued weren’t really handcuffs we wanted to wear, but freedom’s just another word for what the fuck am I going to do now?

I pecked away at odd jobs for months, York Blvd. lodged in my car, a mood ring that I would sing along to with euphoric hope or angry despair, depending on the day’s or week’s circumstances. It was cathartic and soothing, all at once. I remember playing it on headphones, fixing the fence that separated my house from an increasingly vacant and crime-ridden street, wondering if I’d ever find a decent job again, doubtful that an English professor was good for anything else.

York Blvd. pulled the whole Acetone catalog back into my ears that year, and the trio of Hadley/Lee/Lightcap was my copilot through a turbulent journey. At the time, I didn’t know that lyrics on York Blvd. and earlier Acetone albums had already become retroactive stanzas in a suicide note. Richie Lee, the primary voice and lyricist, had killed himself in 2001.

By the time I learned that my 2003 copilot had been a ghost, my own circumstances had changed. It was the summer of 2004, and I’d found the steady job that would indeed let us eventually move wherever we wanted. And I again found myself working on that fence — the gate latch this time — the Acetone mix CD I’d made months ago playing on a boom box, my young daughters nearby, covered in mud, experimenting with a lever built out of stray deck boards and bricks. The neighborhood still sucked, but I was happy, and life was good. It had been good throughout, but now I felt it again.