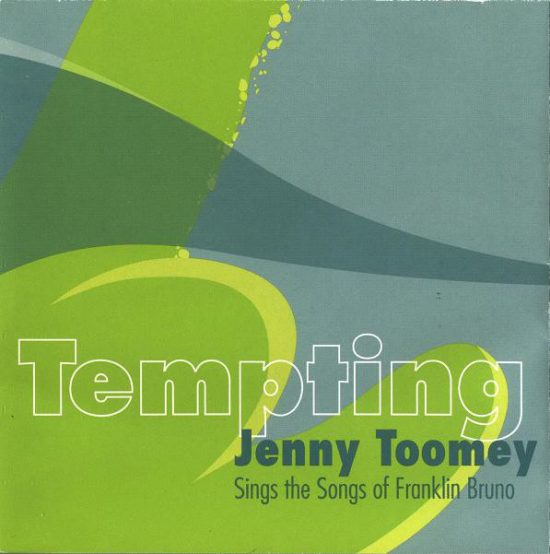 When Tempting came out early in the new century, it felt like a coda to the 1990s, at once valedictory and corrective. I’d followed Jenny Toomey through bands (Tsunami, Liquorice, etc.) but especially as co-founder of D.C.’s Simple Machine records, one of the labels that truly foregrounded “indie” as a cultural/economic program. California’s Franklin Bruno was a vaguer presence I’d caught here and there on cassette compilations and live (I’m pretty sure) once in a Montreal club with his band Nothing Painted Blue. But there were so many lo-fi, alienated-guy songwriters around to keep up with. Tempting alerted me how much more there was to his work.

Like Stephin Merritt of the Magnetic Fields, Bruno’s idiosyncratic voice can obscure how beautiful his songs are in their bones. As he shows in his music criticism (the shared pastime through which I later got to know him), he has a deep feel for the American songbook’s past; notice the wink on “Empty Sentiment,” “I’ve seen you rearrange the truth/Like your name was Nelson Riddle.” Here that inheritance was fully evident. And Toomey’s voice, too, sounded so much richer away from scrappy guitars, torch-carrying in a lounge-cabaret setting — backed by the Sly & Robbie of indie, Joey Burns and John Convertino of Calexico (who also graced, for instance, another favorite album of the period, Richard Buckner’s Devotion and Doubt), along with Bruno’s piano, a horn section, and strings, with bells on.

More so, hearing Toomey sing Bruno’s songs (previously recorded and new) held up a gender-flipped mirror to the bodily anxious indie-rock masculinity of the ’80s—’90s — the way notional sexual enlightenment didn’t safeguard smart, would-be-radical white boys from unhealthy fixations on our failures to summit the romantic Himalayas the culture said were our birthright.

Relationship dynamics here may be represented as labor negotiations, medical procedures, or horror movies. Helplessness and envy are cooled via metaphor to temperatures at which they can be touched. Bruno’s songs of the time are high points for the era’s attitude of sincere irony. Is there a more telling 1990s alt-world couplet than the opening of “Decoy”? “I know the difference between genuine and counterfeit/I know the difference, but I don’t know what to make of it.” We tilted against received falsehoods, but what would it actually mean to be free of them? That Toomey identified enough to want to sing these songs was a reassuring sign that the space between Venus and Mars was not an airless, impassable vacuum.

That counted doubly when I returned to Tempting later in the decade, in my first post-divorce relationship, loaded with “pointless triangles” and miscommunication. “Why won’t you cheat with me?” Toomey challenges her silent interlocutor on the country waltz “Cheat,” running through all the rationalizations and stratagems she can devise. “You say you think I’m ‘too good for that’ — does that mean I’m not good enough? … It’s not like we’d be bringing down the wrath of heaven.” Predictably, I put it on a mix CD.

A couple of tracks later, we consider, to a sort of bossa-nova lilt, whether perhaps the deft application of denial could be life-affirming:

You don’t stop loving something just because it’s dying, do you?
You keep on hoping it will live.
As when you first discover that your lover’s lying to you,
And look for reasons to forgive.

Bruno later told me that while “Just Because It’s Dying” seems to be about a relationship, he was thinking about his music career. Composing songs on guitar or piano was beginning to seem like an archaic activity, but it was something he couldn’t give up. I sometimes feel that way about writing prose these days. He’s still at it, thankfully and/or thanklessly. But the song also can be more immediate: I once covered it on guitar for a friend’s book launch and his wife (predictably again, also a ’90s ex of mine) began crying hard, as it made her think of her mortally ill mother. Unlike the figure in “Because It’s Dying,” my friend’s lovely mother would not be revived in the end.

Neither would the indie world that Tempting hailed from. I know Bruno shares some of my wistfulness about the delusional but galvanizing sense of mission that got lost with it. But these songs also remind me why I wouldn’t want to return there, to be young again in that state of cluelessness, as opposed to the middle-aged kind of clueless I am now — though as Toomey sings, “Nonetheless, I confess, it’s tempting.”