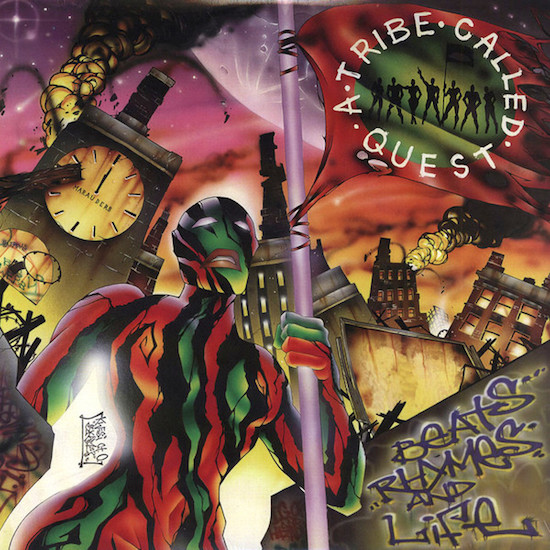 As a child, you receive music accidentally, tangentially. Your parent’s choice for a long car ride, the music playing in the diner, the songs creeping from an older siblings bedroom — these are signals that are probes from other planets, and you are the sedate radar dish, receiving all inputs quietly, perhaps turning the music over in your head, but passively absorbing all, because you have no data to compare it to. It is all music. Music is good. This is where it stops.

And then, suddenly, for most people in their adolescence, this shifts, wildly. Music suddenly matters, because it is relatable. On this score, A Tribe Called Quest’s 1996 release Beats, Rhymes, and Life is close to the top of my personal list.

BRL was one of the first albums I ever fell into that wasn’t immediately intimidating because it wasn’t filled with absurd bullshit — it was songs by a bunch of young guys that were clearly young guys, didn’t have much idea what they were doing, but were going to do it anyway. In retrospect, this was part of a larger movement away from some of the golden age over-the-top braggadocio in hip hop, and into a more realistic tonal stance, right around when self-deprecation master Tyler the Creator was still being born.

“The Jam,” below, is a prime example of this, a story of the crew getting ready to go out to parties, meet girls and lay conquest to all that they see, before they accidentally get too drunk and high to do anything much more than stumble back to their car and get harassed by the cops:

For me, hearing this album vacillate wildly between statements of confidence, admissions of defeat, and confused equivocation was a salve. I was confused about how to be at that age. But I was glad I was at least receiving transmissions that there were other marooned travelers out there, too. And so I turned it up.