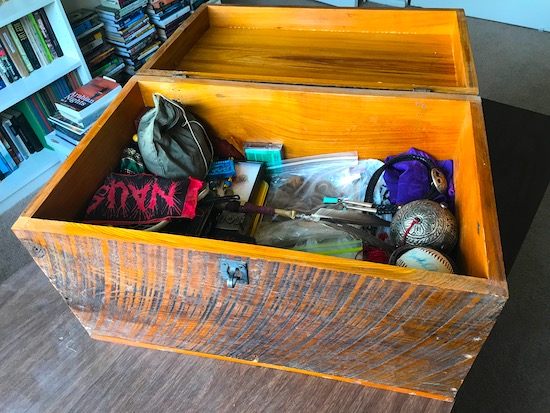 I’ve been hauling a heavy wooden chest around the country with me for twenty-five years. It was built by a lesbian performance artist from Arkansas to fit the dimensions of an old black-leather house call bag I used to keep my mojo in, but gave to a Crow gal named Otter-Woman-Who-Stands-at-the-Center to store hers. Within a year, the bag — and her medicine — was flooded with shit water from a burst pipe. But I’d kept the box, which is now filled — matryoshka-style — with many, many fetishes: My last & first words as a poet. A flensed and disarticulated otter penis. The mat of silver hair I cut from my grandmother’s corpse. A decade of fingernail clippings. A baseball signed by Negro Leagues all-timer Buck O’Neil. Bags of dried pussy willow, bear root, and medicinal clay from the banks of a Bighorn cirque. A malevolent demon statuette. A sacred scrunchie. Crumbled crimson seal wax for a letter I never had the courage to mail. Pantyhose from an incident that resulted in a temporary, but near-total, loss of genital dermis. A Turkish ward against the evil eye. An icon painting, on driftwood, of me at senior prom. The knife used to carve a scar cartoon on my back immediately prior to a situation that resulted — ultimately — in my comforting one of Helmut Newton’s models in court. Minor numismatic treasures. Magical rings. The (mildly) radioactive pen I kept a diary with in the Zone of Alienation. A pine needle cluster from the center of the world. Talismanic stones: from the ruins of Plato’s Academy, from the entrance to hell. A birthstone (for multicellular organisms) that formed in the ocean contemporaneously with the first eukaryotes 1.7 billion years ago. A stone gifted to me by the ghost of Edogawa Ranpo. So many stones. A bone — of unknown species — from the oracular complex of the Cumaen Sibyl. Fossils. Shells. Crushed insects (one, framed). My Grace Kelly stamp. My postcard of Ingrid Bergman. Two dream catchers, retired after particularly nasty oneiric episodes. Guitar-shrapnel I caught in the face at an Acid Mothers Temple concert. The compass I won in a crooked card game with a guy named Little Elk — just before losing my way in life, utterly. Childhood audio diaries. Alchemical paraphernalia. The pewter pill box a lover claimed to have stolen for me from an African museum. Evidence of other crimes.

I’ve added to it, now and then, but I regard the contents of this chest as a single, singular, mass — the arrangement, smells, colors, textures of which I’ve sought to preserve more-or-less intact through 35-40 moves, and have never unpacked for another living soul before now (although I could sometimes swear there were ghosts peeking over my shoulders when I cracked into it). Should I choose death, or sense its approach, I’ll burn the chest — and everything in it — on a beach somewhere. In the meantime, a word of advice: always open the lid of Pandora’s box from behind.