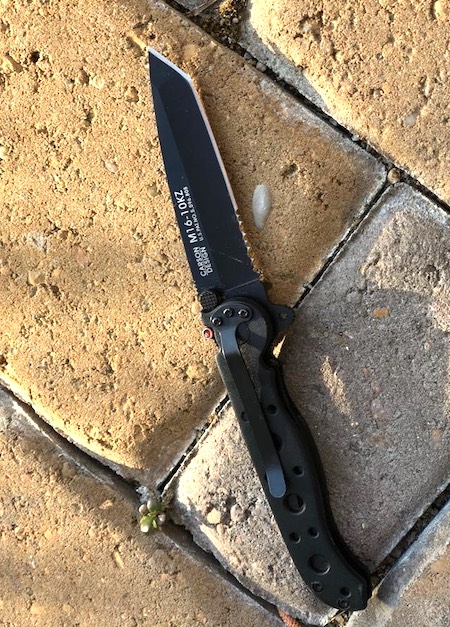 An open switchblade sits in the top drawer of the spare bathroom in my mom’s house. It’s been there for almost six years, ever since I quit my first real job.

My boss gave me the knife for my twenty-fourth birthday. It was a smaller version of his, easier for me to handle. I learned from chubby-fingered men on YouTube how to flick the knife open with a flash of my wrist, the blade protruding from the soft meat of my fist. I practiced every day, jabbing the knife into the shadows.

Jake was an ex-Marine and I was his protegé. “Weapons require mental preparation,” he’d told me, squinting intently into the frothy bottom of his beer bottle. “If you bring it out, you better be ready to use it.”

On the night I quit my job, the first thing I worried about was whether or not Jake would try to hurt himself. He said that he was crazy about me, that he was ready to take care of me for the rest of our lives. And then I quit.

We’d had conversations like that before. I’m not sure what made this one different. I just said the words and a thrill of release buzzed through my spine. It was over.

The next fear I had was that he’d let his hurt come out sideways, and I’d end up like one of those dead girls on TV.

We were in the middle of nowhere, on a trip with a couple of co-workers in Nicaragua. I’d volunteered to sleep on the couch.

There was a liquid density to the shadows that fell across the stairwell, like a pot of ink. My thoughts swirled into the darkness.

Perfect. scene. for. a. murder, I thought to myself, clutching the switchblade beneath the sheet.

I envisioned what I would do if he came down the stairs, if he stepped into the moonlight and made eye contact and I just knew. Like in the movies.

I woke up with the mossy aftermath of violent dreams coating my teeth. The sun was out and so was he… must have slipped right past me, through the sliding door above my head. My cheeks burned as I realized he probably saw me there, drooling with the switchblade hanging limp in my hand.

I tried to close the knife, but there was more resistance than I expected. I imagined the blade coming down fast and clean as a guillotine. It felt heavier, deadlier than it had before — like it could slice clean through my fingers. Like it was ready to bite.

So I let it remain like that, open and exposed amidst crusty tubes of toothpaste and unopened bottles of cheap perfume. Sometimes I like to look at myself in the mirror as I hold the blade. I make mean faces and jab it into the air… until imagination bleeds into memory and I freak myself out with the idea of someone watching me, just behind the shower curtain.

See All Posts by Chelsea Barabas

Chelsea Barabas is a research scientist at MIT, where she examines the spread of algorithmic decision making tools in the US criminal justice system.