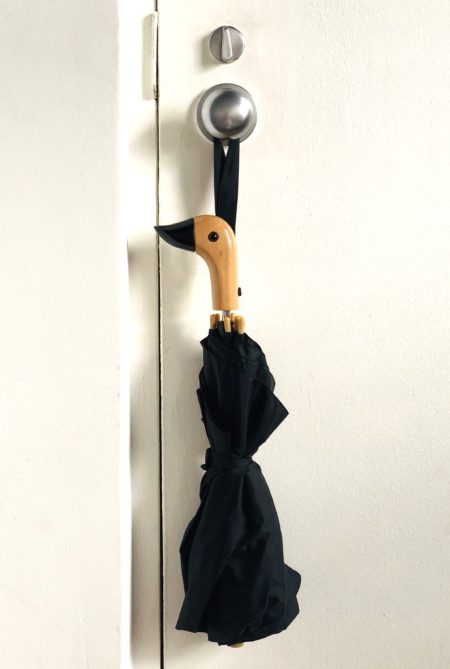 “Walk in the rain like a duck swims in water.” This is the promise of the Deluxe Duck Umbrella — a relatively inexpensive, 100% nylon parasol, the defining feature of which is its waggish handle. Shaped like the head of duck and made from wood, the curved hilt sits comfortably in the hand whether it’s swinging jauntily by my side (before the rain), or held aloft (during a storm). In either position (rain or shine), I palm the duck’s crown, wrapping my fingers loosely around its beak and neck. Two beady black eyes make the likeness complete. My mind starts to wander.

I don’t really remember how it all started. But this waterfowl-enhanced umbrella has been my “go-to” since at least the early aughts. I bought my first — and all subsequent replacements — in the bowels of the 5 Avenue / 53 Street subway station, at a subterranean Midtown shoe repair shop with odd hours and a Dunkin’ Donuts next door. It’s the kind of store you don’t notice at first. Or maybe even at second.

While perhaps a relatively uncomplicated purchase for most people, in New York — the city I’ve called home for 17 years — the quality of your umbrella can make or break your day, and ultimately your spirit. As a city dweller I spend a lot of my time amongst steel and glass, sure, but an equally large (and perhaps surprising) portion is spent walking around outdoors — commuting from home to the subway, to work and back again. Day after day after day, I walk the dog, get groceries, run out for beer or to the pharmacy, take the dog out again — no matter how inclement the weather. A good umbrella is a faithful companion against the wet, dark night. A good umbrella that’s also a duck? Not only does it keep me dry, but it gives me a certain joie de vivre as I go about my day.

Nestled gracefully between the cheapest option (readily available, but far too disposable) and its designer counterpart (expensive but too precious for the job at hand, plus I’ll probably leave it in a cab and be out $150), the Deluxe Duck Umbrella, occupies a unique middle ground. It’s a workhorse with a charming mug, and I can’t tell you the number of times that stupid little duck face, sticking out of my bag, or hanging on the front door has brought me, or someone I care about, an unexpected moment of happiness. Strangers often smile when they see it, and it’s criminally easy to spot in any coat check, “Oh, mine’s the duck.” I’ve only lost a few over the years, and it’s always just a matter of time before I make the pilgrimage and start all over again. I guess it’s something I’ve got figured out, and most days, that’s more than enough.

See All Posts by Bryn Smith

Bryn Smith is an editor and senior content strategist at Google, and author of the interview collection Twenty Over Eighty.