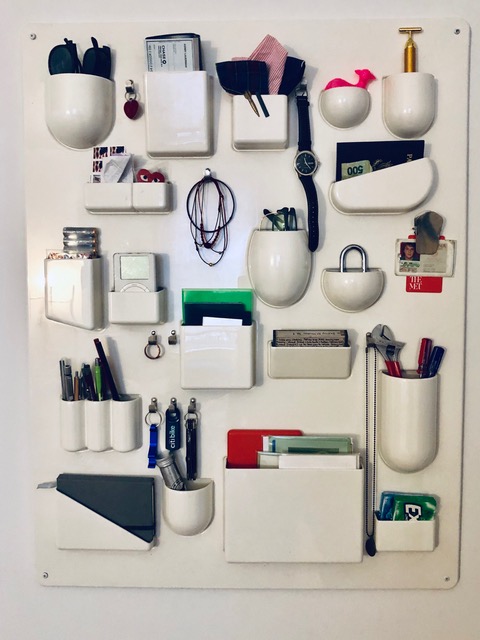 When I splurged at the beginning of this century on Dorothee Becker’s Uten.Silo wall organizer, I told myself it would look nice, but more importantly, that it would be incredibly practical, ordering my life in sensible, stylish fashion. The rare object on any of my walls, it was a vision of white-on-white Apple chic. And it promised to make even the smallest detritus of life — the crap usually in my messenger bag and kitchen junk drawer — appear thoughtful and curated.

That felt very much like a statement because, for many of us who grew up in the ’70s or ’80s, surrounded by carved wooden bric-a-brac or Hummel figurines or Holly Hobbie art or god knows what, we preferred simple-bordering-on-ascetic. Way before the “radical uncluttering” of today, we craved a harsh, blank, unsentimental canvas. The macramé-ed and framed photo-collaged walls of our youth were stripped bare and turned chalk white. They became the backdrop of every shelter magazine, whose enthusiasm now turned to over-designed everyday items like that still-ubiquitous teardrop Method hand soap bottle, say, and everything iPod. And, of course, the hard plastic simplicity of Vitra’s 2002 reissue of the Uten.Silo.

With the irrational exuberance of the time, I also imagined the organizer as a sunny prompt for some new lover, who would awaken to see it gleaming on my wall and be so impressed that he would be compelled to ask about it, about me. My iconoclasm (Where’d you ever find a Sputnik-era steel tie-clip in the shape of a rocket?), cleverness (Look! Your Moleskine fits perfectly in that slot!) and exquisite taste (I’ve never seen a more beautiful gold-plated cat comb. Ever.) — all right there, just casually cobbled together in a wall sculpture that could pass for a nurse’s station in a surgical ward.

As far as I can remember, as I’ve dragged it around and posted it to walls in four different apartments, it’s impressed precisely no one, generating maybe one noncommittal, “that’s a nice idea.” And at times, when I let it go — adding banal items like an oversized Band-Aid box or roll of masking tape that don’t conform to Becker’s exacting dimensions — it just looks like crap, a kitchen junk drawer that’s been projectile-vomited. But when it’s been edited, and all my little treasures are in place, it feels right. I feel right. And no, it’s not all completely useful (I’ve never worn a tie clip in my life). But don’t you dare call it bric-a-brac.

See All Posts by Kerry Lauerman

Kerry Lauerman is an executive editor at Forbes In New York.