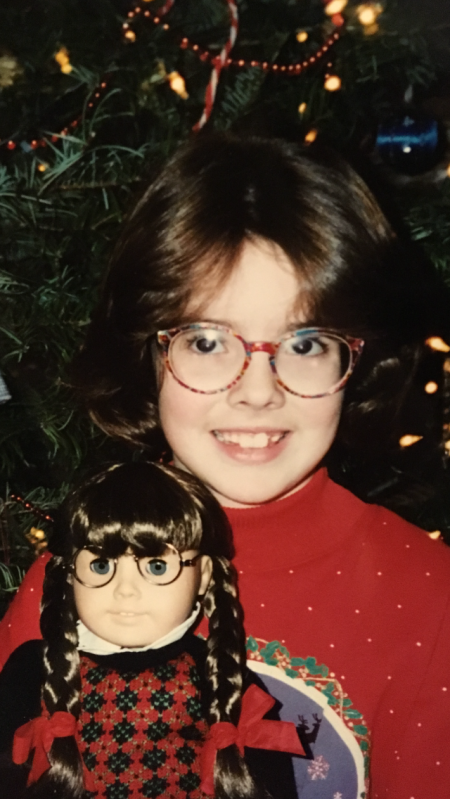 Most of my friends had American Girl dolls when I was in elementary school, and one girl, my best friend, had several. Kneeling on the plush carpet of her bedroom, a space as big as my living room, I watched her secure a bonnet around the neck of Felicity, a doll dressed like a young girl in colonial Williamsburg. Kirsten, the pioneer from Sweden, was wearing her white Santa Lucia costume complete with a candle crown. Samantha’s shiny Victorian hair spilled out from under the cover of her canopy bed. My friend slept in something similar.

Back home, I had a baby doll with a soft, worn body and a plastic head that my sister had colored with markers. Her name was Sarah, and she didn’t come with a historical backstory or book series like the American Girls. They cost $115 each including a paperback. Accessories and extra outfits were more.

Though nothing in my life suggested that we struggled, I spent much of my childhood worrying that we didn’t have enough money. What would we do if we couldn’t afford food? We didn’t have a Victory Garden like the World War II-era doll, Molly McIntire, or sugar and butter rations to make turnips more palatable (see: Meet Molly: An American Girl, chapter one).

And yet, I badly wanted a Molly doll of my own. Our eyes were different colors but she had brown hair and glasses, like me. And, I believed, owning this toy girl in saddle shoes would cement my social status. I was in third grade and I wanted to belong among the wealthy friends I always felt a few steps behind.

Molly was under the tree at Christmas. Her braids were tied with red ribbons and her white shirt collar curled over a sweater. Molly’s bed was more modest than Samantha’s, but Santa had not seen fit to give me the $40 twin or her evening accoutrements like a small lamp and miniature hot water bottle and Nancy Drew book ($18). Instead, I dressed Molly in striped pajamas ($20), her robe and red slippers ($20), and stood her in a stand (included).

I could see her from my own bed, where I adopted the doll’s same vacant expression after I took off my glasses to sleep. Without a prescription the world blurred and it was in that dark that she started to take on a more menacing shape. I squinted to make sure her fuzzy silhouette was still there. I held my breath hoping she wouldn’t move.

Eventually my fear that the doll would come to life overwhelmed my guilt that my mother had spent so much money on a gift I no longer wanted. I asked her to hide Molly in the closet. I fretted about the doll’s feelings stuffed behind spare sheets, and then I wondered about my mom’s.

Finally, though, she suggested donating Molly for another girl to enjoy. “Someone who couldn’t afford one,” she said.

See All Posts by Ciara O'Rourke

Ciara O’Rourke is a writer based in Austin, Texas.