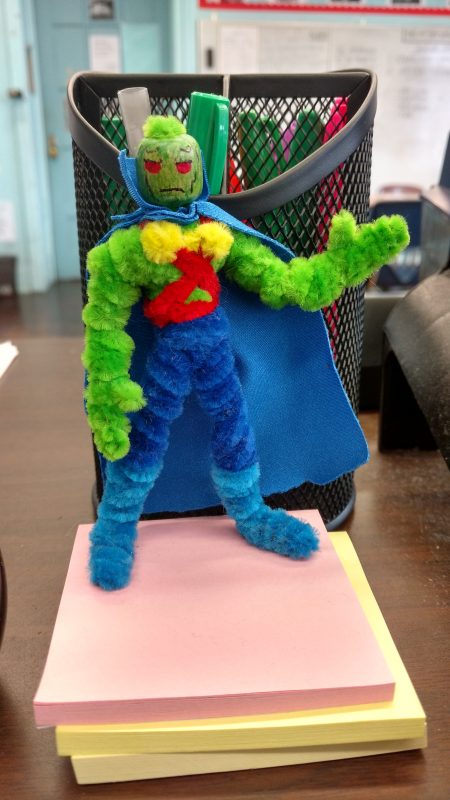 My first foray into the teaching profession came in the realm of special education. My degree prepared me for many of the practicalities of teaching: how to lesson plan, how to organize a classroom, and how to walk into a room with an unearned air of confidence and a persuasive smile. The wide swath of behavioral adventures I encountered during my special education tenure, however, was a necessary shock and awe campaign that managed to contextualize the road ahead and harden my resolve. One of the more self-possessed students I encountered then was a unique case. He would decline to participate verbally in any situation not an emergency, generally only offering a yes or no nod as acknowledgment. His energies, instead, went toward an activity he found more fruitful — the construction of superhero figurines using pipe cleaners. As a burgeoning teacher looking for any way to connect with detached students, I was elated. I made several attempts to get him to share his craft with the class. A lesson on building action figures taught by a fellow student? Home run. With a single nod no, he declined to expose his intellectual property to the group. Instead, he struck up a booming business at school: ten dollars per figure, no teacher discounts. My first buy was the Martian Manhunter, J’onn J’onzz.

In comics lore, the Martian Manhunter is the last of his kind; an alien adrift in a universe he doesn’t and maybe will never understand. He’s lauded and respected for the heroic things he does, but operates on his own with no real, tangible support. After rougher days in education, I can strangely relate. Teaching is ritual and that is both the profession’s downfall and saving grace. Each day, you see the same faces in the same room, preach the merits of the same subject, and fight the same battles as best you can. The endpoint of this daily ceremony is most often the teacher desk. Amid stacks of papers to be graded and endless other to-dos, that is where J’onn Jonzz has sat each year of my career. I take the figure into my hands, straightening the loose, fraying fabric cape around the shoulders and run my fingers along the tightly fitted, carefully shaped pipe cleaners constituting his body. The figure is a reminder of why I chose to become a teacher in the first place, and its pull grows increasingly strong in the afternoons. It has been a challenging semester and my work/life balance has suffered. I have a therapy appointment to get to soon, in which I’ll discuss the same set of frustrations that has plagued my life as an educator from the start. I look the Martian in the eyes for longer than I should and gently set him back down. From my desk, he has observed the ups and downs of many semesters. Leaning back in my chair, I’m not sure how many more I have left.

See All Posts by Matthew Daniel

Matthew Daniel is a tired, but hopeful teacher living in New Orleans and working in the ever changing, never changing education landscape.