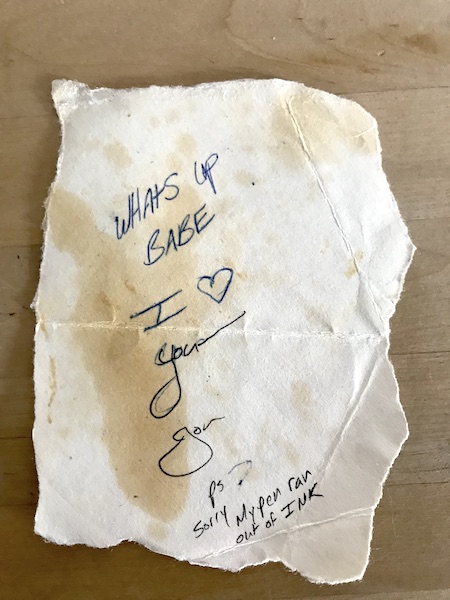 My preoccupation with longing started early, with a love note I typed out to Andy Choi, the neighbor boy and older brother of Ryan, with whom I’d build leaf forts in the backyard. I didn’t send it. I was never going to. Instead, I stuffed it into a decorative basket in our guest room, then lied when my mom found it, saying it was just for fun, for no one in particular, Andy who? or probably I tried to tell her I didn’t write it at all.

Some half-dozen years later, I found myself on the receiving end of someone’s longing, and love missive, my very first. It felt strange; for so many years, the pining was my job. I’d returned home to my parents’ gray cul-de-sac colonial from a night out with girlfriends to find a grease-stained scrap of paper tucked beneath the wipers of my car, a red Jeep Wrangler they’d gotten me when I turned 16. I’d asked for the car, it was what I wanted, but, then, the longing was the thing, and I was sort of embarrassed to actually get it. I already felt like an imposter, and a bit of a cliché, having worked hard to overcome my middle school mediocrity to become the 16-year-old girl I thought everyone wanted me to be: class vice president, prom queen, a varsity athlete, even though I was only average-pretty and far too timid with a field hockey stick to really be any good. I wanted to stand out. I wanted to fit in. I wanted to be anyone, everyone, else.

The note, predictably, did not pass my friends’ romantic test and so it did not pass mine. It said nothing profound, they said, it was not properly punctuated. Its former life seemed to have been a French fry bag. But that’s not why I thought it, and he, weren’t good enough. That was because I wasn’t good enough, and if he liked me, neither was he. I broke up with him soon after.

I return to this greasy old note again and again, whenever I feel myself missing that old familiar, comfortable wistfulness. But it also serves as a warning. I’m not that 16-year-old girl anymore, thank god, except when I am, and that note, that boy, would not be the last time I let something, and someone, go in the name of people-pleasing, or because getting what I thought I wanted meant it wasn’t, in fact, worth getting.

Recently, he and I reconnected — 20 years and many unshared milestones later. Seeing him sparked in me a version of the longing I had not felt for a while, like the note come to life. I was content in my marriage, my career, my life. I was happy. Wasn’t I? I suddenly wasn’t sure. For a minute, things got complicated. But, then, I was wise enough now to know: The longing was the thing. The possibility was enough.

See All Posts by Alyssa Giacobbe

Alyssa Giacobbe is a writer and editor. She lives with her family in a beach town north of Boston.