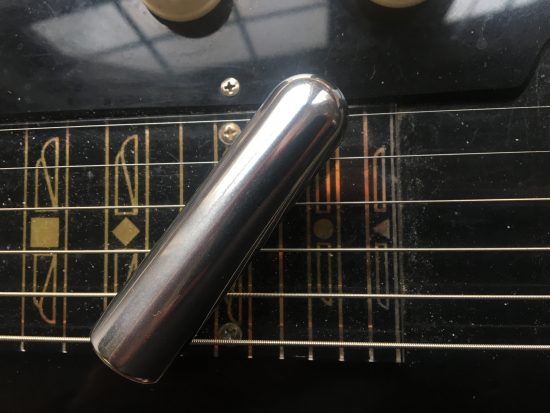 As far back as I can remember, I had dreams in which I’d realize that I could play some unpromising surface — a car trunk, aluminum siding, a stone wall, an overstuffed chair arm — like a musical instrument. I’d discover that if I moved my fingers on it just right I could get a ringing tone out of the thing, and I’d figure out how to fashion notes, an erratic melody.

Playing piano and violin as a child scratched only some of the deep itch expressed by the dreams. In adolescence I switched to electric guitar, and bending the strings scratched more of the itch, but I kept having the dreams. Decades later, having wearied of trudging back and forth in a Chicago blues groove that had become a rut, I took up the lap steel guitar. When I did, the dreams stopped, and have never recurred.

You sit, rest the lap steel face-up across your thighs, pluck the strings with your right hand, and fret it with a tone bar held in your left. Sometimes it feels to me as if the tone bar, a smooth hunk of stainless steel that you slide across the strings with a light touch and an undersea-slow vibrato, is really the instrument, and the lap steel just the terrain on which it moves.

I play in an A6 tuning especially suited to honky tonk, Western swing, and Hawaiian music, and I use a Dunlop 918 tone bar, which has a bullet nose that you can dip down like a fingertip to touch just one or two strings: This one, here, and that one, there. It took me a while to get used to the bullet bar. I started out with more rectangular bars that were slot-dimpled along their sides so that they seemed to jump into my grip. They were easier to maneuver on the neck. The Dunlop, round and featureless except for its snub nose, took some getting used to, but now everything else feels unnatural.

The Dunlop has the compact heft of a marble chess piece or a full beer, a combination of dense weight and cool surface that communicates instantly to your brain that your hand has seized the right tool for the job. Its machined smoothness promises the smeariness of sound you’d be likely to produce if you were trying to figure out by trial and error how to play a car trunk or a stone wall in a dream, but it also implies the precision of technique you must develop to play the lap steel properly.

Playing with a tone bar really is, as the lap steel virtuoso Jerry Byrd said, like playing the guitar with one finger — but it’s a magic finger that can make an electrified plank sing. Nobody plays the lap steel because they want to shred at formidable speeds. They play it because to put the tone bar on the strings is to draw sweet music out of the mute, resistant materials of the world.