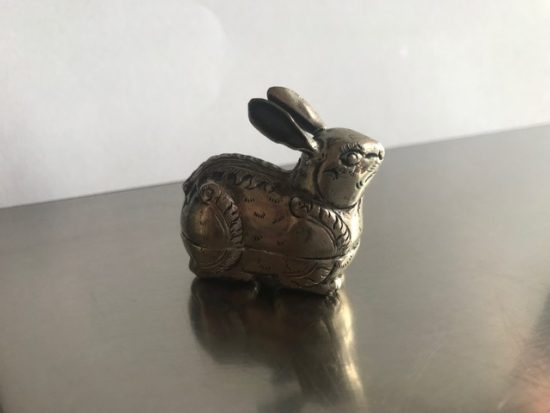 Traveling in Chiang Mai, Thailand many years ago, I stumbled upon a tiny vintage silver rabbit box in a small shop. I thought it’d be a nice gift for my mother, who has a soft spot for animal figurines. It was also an unexpected gift for her, since she often negates whimsy for the sake of practicality, and would never buy such a thing for herself. I thought she’d be delighted by it. I was delighted by it. I should have known that’d be trouble.

I tucked the little rabbit away in my suitcase, pleased with my choice and the ease with which I’d acquired it. The next day I checked my case just to see if it was still in the corner where I’d tucked it away. The day after, I double-checked. And so on — until this day. I never gave that little silver rabbit to my mother, though there have been plenty of gifting occasions that would have been perfect. Instead, I wrapped it in a square of silk and shifted it to my jewelry box for “safekeeping.”

Just to step back for a moment, I’m not into any other “cute” little animal-shaped things; cow-shaped creamers and adorable kitty miniatures feel like objects of misplaced sentimentality that make me cringe. But the rabbit box has become a kind of beautiful worry-stone for me. Its curved, engraved surfaces are delicate and intricate, the mark of a singular hand. It has detailed paws and a stylized but beautifully rendered line of fur that ruffles down its back. The box is also well crafted and tidy; the interior is hollowed out precisely, and the top and bottom halves meet snugly. All of these things make it compellingly and satisfyingly tactile.

I still check for it every week. If things have gotten messy, I frantically scrabble around in the tangle until I find it, feeling a deep miserly pleasure when I nestle it in my palm and run my fingers over its sweetly engraved surfaces.

See All Posts by Ramona Lyons

Ramona Lyons is a San Francisco-based semiotician whose work focuses on the intersection of the visual world, narratives, people, and culture.