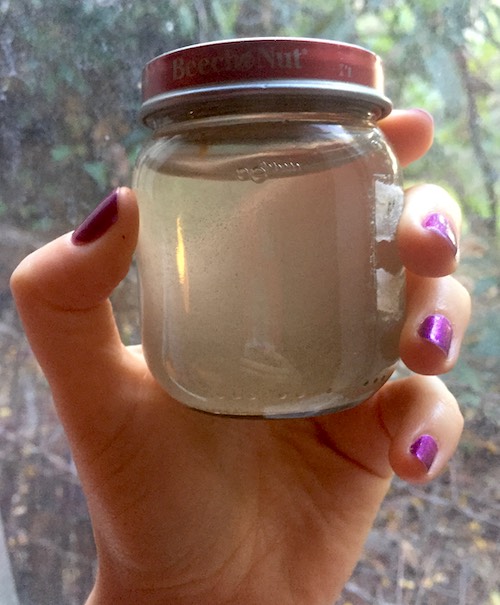 I keep a baby food jar of river water next to my desk. It’s not even mine. It’s my husband’s. He left it here when we traded offices. Someone named Moose had given him a jar of the water originally, but it evaporated, so this was its replacement.

The curved glass magnifies the silt at the bottom. When I’m working on something and feeling stuck or bored or drained of any possible wonder, I shake it, like a snow globe and watch the dirt swirl around, the water momentarily cloud, before it clears and the silt resettles to the bottom. I do it over and over, each time, thinking, this time I’ve done it, it won’t go back. But it always does. The water is from the headwaters of the Mississippi, obtained by my husband when he was trying to canoe the length of the river 8 or 9 years ago.

We moved out to Los Angeles in 2012, and it feels permanent, but I don’t think it will ever feel like home. I’ve never gotten used to the dryness. I miss living along the Mississippi — the swampy air, the damp earth, that artery of water. There is a river that runs through LA, but it’s a cement drainage ditch. Someone told me once, that it was completely comprised of sewage, and this seems entirely possible.

Before coming to LA my husband and I were both nomadic. We moved from apartment to apartment, from city to city, but then we went as far West as we could and collapsed, had a child. I don’t think we will ever move again the way we used to, constantly, thrillingly, the old apartment or city, our old selves receding in the rearview mirror. That impulse is still there in me, that restlessness, but the way now to get at it is through my writing. And holding this jar, this talisman, watching its insides swirl up like a tornado, then settle back down, it reminds me of all of my previous selves, and all the other lives I almost had but didn’t.

See All Posts by Katya Apekina

Katya Apekina writes fiction, screenplays and radio dramas. Her debut novel, THE DEEPER THE WATER THE UGLIER THE FISH, came out in 2018.