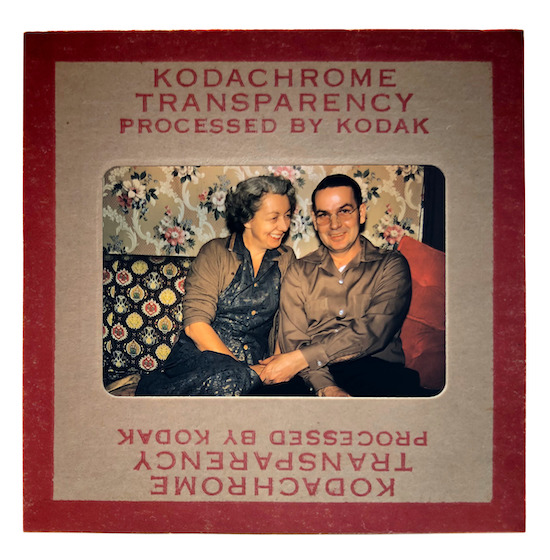 I don’t know who this couple is, but I own this slide. This intimate moment was purchased on eBay for a side project that never materialized. But that hasn’t stopped me from seeking out more of them, acquired piecemeal in bursts of interest and online bidding. I now own thousands. Birthdays. Anniversaries. Weddings. Vacations. The non-occasions that simply complete a roll. All of these moments captured decades ago and processed into objects meant for projection on hardware that I don’t even own. And yet I keep buying them.

Decades after this shot was taken, there is still no shortage of people taking photographs of their lives, and there are even filters that can replicate the beauty of Kodachrome color. But the majority of images that we capture today on our phones never exist in the physical world, at least not automatically. There is a sadness in the displaced photographs I’ve collected, but at least they exist to be found.

And because of the complex and now defunct processing involved in fabricating this type of slide film, I trust that these images are real. This man and woman once sat on a couch holding hands in front of some pretty hideous wallpaper. Given the retouching software that is now so readily available, I wonder if future generations will have the same faith in the photographs we are generating.

While time has rendered the medium of slide film obsolete, it has also made my collection possible. I now own more photographs of other peoples’ families than I do of my own. Since my son was born seven months ago, I have taken hundreds of pictures of him, but I have yet to hold a single photograph of him in my hands. I have embraced this new digital condition in which these memories are now stored on multiple devices and in multiple clouds, but I hope we haven’t traded convenience for longevity. My surplus of adopted family photos have outlived their families, and one day I hope to find a way to thread these images together and give them a new life. But until then, I will probably just keep stockpiling them, until I can’t justify it anymore.

See All Posts by Hilary Greenbaum

Hilary Greenbaum is the Director of Graphic Design for the Whitney Museum of American Art, and former designer and columnist for the New York Times Magazine.