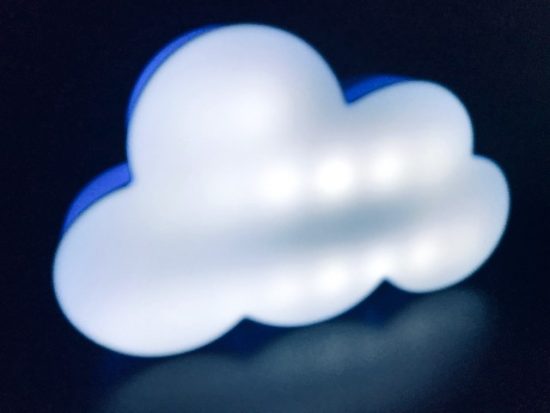 I want a cloud that I can live on all the time and never have to leave. This longing has been going on for a while but it really kicked in when I bought a plastic cloud that lights up (with six double AA batteries) and comes with five erasable markers. I can make my thoughts come and go as they or I please and it’s so cheerful looking.

My cloud not the kind you access through a device, based in some computing center in Mesa, Arizona, or something. Nor is it a some misty white thing in the sky that looks lovely but can never be depended on, the kind that float around, disappear, turn dark in a storm.

Because there are no physical concerns, I wouldn’t have to sleep, so I could stay up forever and listen to music and stream movies and download books (but nothing long) and solve mysteries. I don’t know if there are mysteries on the cloud, but I could cook some up.

I wouldn’t have to eat (so time-consuming to cook, swallow) — my food could go to the poor — or wonder if I drink too much because I wouldn’t need alcohol on the cloud or controlled substances or even candy.

I wouldn’t have to exercise or have biopsies or genetic testing, and stare at loving doctors who try not to have a scary look on their faces.

I wouldn’t have to go to parties and listen to people talk about how important they are and all the politicians they can’t stand — all of whom look alike and say the same things anyway.

I wouldn’t have to walk in nature and look at boring landscapes which are so predictable (sun rises, sun sets, autumn leaves fall). There are photos of that all over the internet anyway. So if I miss seeing a peony, I just look it up. I prefer architecture, design, fashion, and they photograph better on the internet anyway

I would never again have to apologize about using plastic.

There are two blips. What if I want to make things with paper and ribbons or fall in love in three dimensions — not just those internet professions of adoration? I’m still working that out.

But the biggest draw — I’ll never have to say goodbye.

See All Posts by Toni Schlesinger