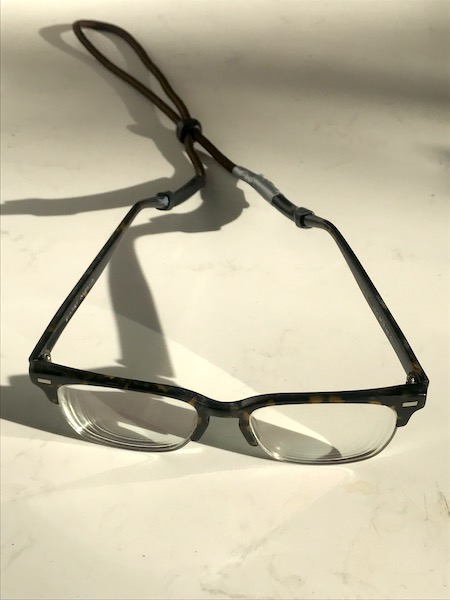 The summer I was 16 I caddied at a golf course in my New England town. My task, after I watched a golfer tee off, was to hoist their bag of clubs onto my shoulder, walk out onto the fairway ahead of them, and wait for them at their ball. When my first golfer teed off, his ball disappeared in the sky. I wandered the fairway toward where I thought it might have gone and he said, “I wish. It’s over there in the weeds.” After four or five more golfers’ balls vanished in the air, I had my eyes checked and bought a pair of glasses with thin black metal frames. I became a decent caddy, driving a car became possible, movies became enjoyable, the world looked clear again. I cherished my glasses even as I experienced the onset of my nearsightedness as the first note in the long funeral march of my body’s decay.

I was 17, in New Jersey, running behind a moving car my glasses were on top of; they slid off and I mashed them under my shoe. Because I wanted, needed to see, I bought a new pair, with a stronger prescription this time as my sight had already worsened. At 22, a joke-entrant in a dance contest, I sexily removed my glasses, threw them at the judges, and they never came back to me. I bought another pair, stronger again. At 30, on a small, theoretically non-tempestuous river in Colorado, I was wedged into an inner tube when it violently capsized and my glasses sank to the murky bottom. At 40, I stood on the turret of an ancient castle on a cliff in a Swiss Alp, peered over the edge, my glasses slipped from my face and vanished into the sky below me….

Another pair, and another, and another, each stronger than the previous because, if you want to be literal about it, each pair of glasses I’ve owned is different from all the others. But just as Borges proposed a world in which all people in the moment of orgasm are the same person, so I believe all pairs of glasses in the moment of their loss or destruction are the same pair of glasses. Sure thing, the poet William Matthews argued, is an oxymoron, and this is as true of my growingly failing eyes as it is of their more and more strenuously corrective, inherently unstable prostheses. How sublime and temporary to be a person or a pair of glasses. Each morning when I put my glasses on my face, I am putting god on god, death on death.