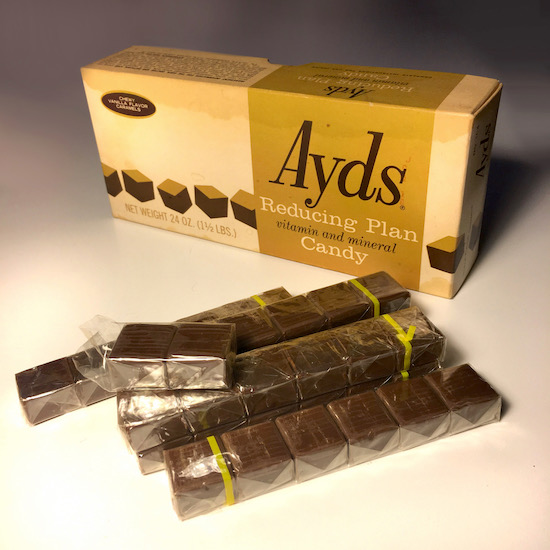 I rescued this sad box of Ayds from my grandmother’s kitchen cupboard shortly after her passing in 1993. It was trash to be discarded, covered in dust. As a passing curiosity I picked it up and did a quick calculation. Ayds had been off the market for the better part of a decade by that point. Its moniker’s unfortunate similarity to the disease of the same name had sullied the Ayds brand, to put it mildly. The popular “reducing candy” succumbed to the ensuing PR disaster, leading to a decline in sales and the product’s eventual demise sometime in the mid-1980s. And this was an earlier box design than the one I remembered from my days working at the drug store in college in the early ’80s. The smart-looking design aesthetic of the package held some clues to the brand’s eventual identity crisis; made to be sold alongside “diet pills” like Dexatrim, adjacent to Flintstone vitamins and Geritol, but within grabbing distance of the Whitman’s samplers and Haley’s M-O. This old box of science candies was designed to appeal to adults who might be attracted to the word “plan,” applied to weight-loss caramels. (I never really knew what Ayds was: Did Ayds have an appetite suppressant in it? Caffeine?? No. Turns out, Ayds was just a vitamin pill in the form of a piece of candy, a precursor, I suppose, to today’s gummy-bear vitamins. If a person was restricting their diet or skipping meals, they could just eat Ayds and still get some guilt-free nutrition as well as some of those delicious “available calories.” According to the list of ingredients, Ayds was 72.5% corn syrup, 9.9% fat. So, it’s Tootsie Rolls, basically.) There was still product inside this box, wrapped in cellophane, dried out and hardened, along with a few grocery coupons grandma had clipped, stowed in there, and forgotten about… all of it dated 1974, the year Rhoda went on the air. This, I realized, was probably the first and last box of Ayds grandma ever bought, its life spent migrating to the back of her cupboard. She’d hung on to those fossilized caramels for twenty years. Impressive. It was the kind of Depression-era household thrift she was known for and which prevented her from ever throwing anything away. Not even Ayds. This box had come so far, it seemed to me. I couldn’t bear to see it just go into the trash, so I wiped it off and put it in my suitcase. And now these reducing candies are 45 years old and hard as dice — beautiful shiny brown dice. So I keep them around, for old times’ sake, collecting dust in my kitchen.

See All Posts by Shawn Wolfe

Shawn Wolfe is a graphic designer and recovering brand fetishist from Seattle, Washington.