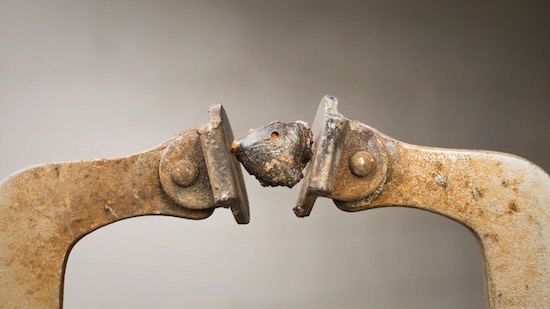 This is Trinitite. I’m not supposed to have this specimen. Even so, the crimes which brought it into existence outnumber, and far outweigh, the ones that brought it into the United States.

A layer of this Charleston-green glass formed on October 14th, 1953. Molten sand cooked by the first atomic detonation on Australian soil, just before a 15,000-foot-tall radioactive cloud swept east from Operation Totem’s ground zero – across Wallatina and Wellbourn Hill, and thence to Townsville – poisoning and ultimately killing dozens of unsuspecting, unevacuated Aboriginal people.

I collected it in the Woomera Prohibited Area, at the foot of the Totem-1 bomb test obelisk at Emu Field, wearing a black “Lovecraft Rocks!” t-shirt emblazoned with the writer’s image in headphones, spinning vinyl. I also had on a respirator, disposable gloves, and medical booties: business casual for the Chthulucene.

Getting there took some doing. First I flew ten thousand miles from Los Angeles to Darwin, where I met my friend m1k3y. m1k3y is the self-described leader of an asteroid death cult, a connoisseur of nuclear exclusion zone literature, and, as it turned out, a crack navigator. From Darwin, we drove south, to Coober Pedy, a troglodytic opal mining community where prospectors live among the 1.2 million tunnel shafts they’ve dug below ground. There, we practiced with a GPS antenna and cached maps, equipped a 4×4, and lit out through the Dingo Fence for the Anne Beadell Highway: two hundred miles of unsealed track into the seemingly uninhabited Woomera. Along the way, I managed to knock off a mirror, stave in the passenger door, shred one tire, and fatally puncture another. Routine use of an air compressor became necessary. When we finally limped back into Coober Pedy, the rental agent took one look at her truck, swore Klein blue, and quit work on the spot.

More imprudence. Alpha radiation can’t easily penetrate the dermis. The real risk lies in ingesting particulates. So when I tell you m1k3y and I set up camp a few miles from ground zero – in a vacuum-quiet field of sticky red dust, among the footprints of evaporated buildings – and cooked our supper there, and that I left the tent unwashed afterward, and that I still keep a Ziploc bag of mildly radioactive glass on my dining room table, I’ll understand if you shake your head at me. I will.

When people ask, confusedly, why I invest as much as I do into exploring these blasted heaths, I usually say something about bearing witness, exorcising dread. But look, it’s no secret I feel doomed. Ask anyone. The suicidal ideation of the Cold War was infectious, and I caught it young. These places make sense to me. They seem… sympathetic, somehow. Emu Field looked like a window onto extinction smashed from the inside: irradiated shards of a glass I could see myself in, however darkly. What I magpied home from Operation Totem is a sample of that bleak, private geology – anthropogenic, nihilistic, almost black. My ruin stone.