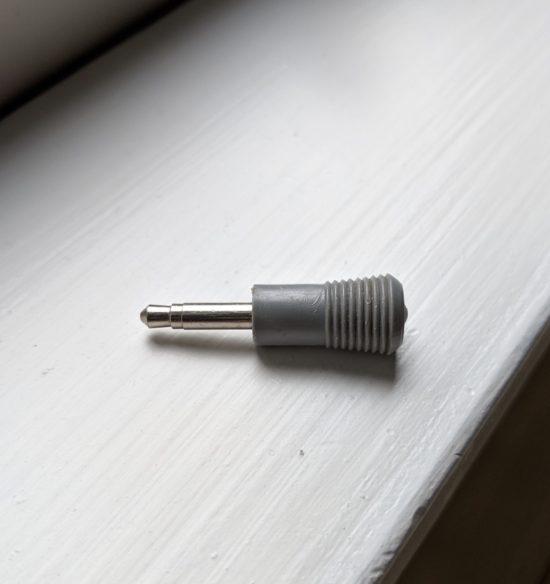 Sometime around the turn of the millennium I was plagued by a very turn-of-the-millennium hassle: laptops that made unwelcome sounds when turned on.

Whether generic beeps or the nascent sonic branding of digital devices, these startup noises intruded at inconvenient moments. And then one day my girlfriend handed me a mundane object of metal and plastic that she thought might be of use.

It was — and for me, at least, remains — a truly strange thing: an audio jack that leads nowhere. Where there should seemingly be another jack, or a cable, or maybe an LED, there was simply nothing except hard plastic, harder even than its utilitarian gray might suggest.

The jack had the so-called “male” end, and then it dead-ended. It was, I learned later, called a dummy jack. The gadget, if the word “gadget” can be applied to the dummy jack, originally accompanied a Realistic tape recorder decades earlier — its purpose, like the tape recorder, now lost. But the original purpose didn’t matter. What mattered was its new purpose. What mattered was that my laptop, thanks to this protruding doodad, a premonition of dongles to come, no longer made a scene. No software solution had been sufficient to quell the boot-up beeps, but stick the dummy jack where my laptop expected headphones, and suddenly it was as quiet as a mouse — well, a mouse with a rattly hard drive and a robust cooling fan.

Technology was not, as the saying goes, evenly distributed at the millennium’s turn, and even less so in New Orleans, where I was living at the time. Working on a laptop amid chicory coffee and po’ boys already marked me as alien in a place where you weren’t local until you had multiple generations to visit at the city cemetery. Those beeps had sealed the deal on my outsiderness. The dummy jack didn’t just quiet my technology. It provided me a cloak of relative anonymity.

Over time, that dummy-jack fix became less necessary, until it wasn’t necessary at all. Laptop manufacturers slowly became conscientious about sounds, startup and otherwise. As this technological-cultural transition unfolded, my dummy jack became all the more valuable to me. Outdated technology may become art, but on the way to art it sometimes becomes a fetish.

I fetishized the dummy jack for years before I understood why, before I recognized it as a totem of silence. I mostly write about ambient-leaning, minimalist music and sound art. The dummy jack was a sound art readymade that encapsulated my aesthetic world view. The question was how to safeguard this minuscule obsession. I came to keep it in a container with actual desk items (paper clips, push pins, rubber bands), and there it remains, a treasured object amid the mundane. Of course, in my increasingly paperless office, I need those things less often, too, so the totem rests amid other potential totems, totems in waiting.