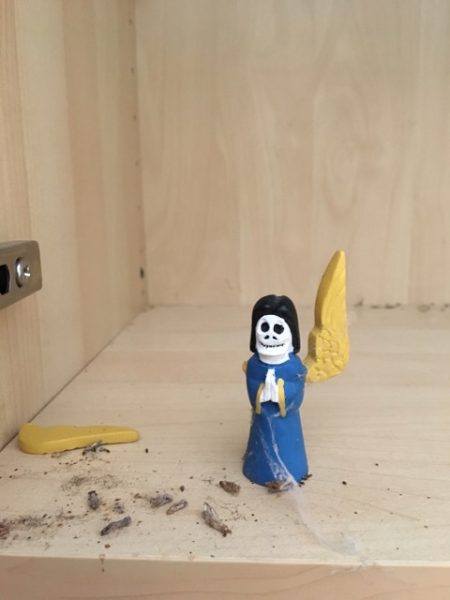 My late husband Rodney loved all things Mexico: the towns, the art, the food, and the people. That love, alas, largely went unrequited. He’d go into taquerias and enthusiastically give his name as “Rodrigo,” trying to endear himself to the guys behind the counter, who gave confused or withering looks in return. Once, while we were in a gift shop in New Hope, Rodney bought a handful of those little Day of the Dead figurines, fetish-like embodiments of departed ancestors. I found them creepy, and so they were always relegated to one of his bookcases, both when we lived in Pennsylvania and after we moved to California.

About 12 years into our marriage, Rodney’s tendency to drink vodka intersected badly with a midlife crisis. He hunkered down in our San Diego house, binge-drinking and unemployed, for more than two years after I had had enough and moved out with our two daughters. He refused to go back to rehab, or even to stay put during multiple hospital stays, preferring to hole up in the increasingly crammed and filthy house, with its pungent smells and beach towels hung over the French door windows. He died there alone; his heart gave out while he was detoxing, throwing up blood on the bedroom floor.

It took more than a year to get the house cleaned, emptied and ready for sale. Friends came to help as I sorted, tossed or gave away piles of clothing, tools, books, as-seen-on-TV gadgets, old junk mail and, yes, those Day of the Dead figurines.

Every time I’d walked into the house alone over those 15 months, I always said hello, with a question mark. At any time I felt he might step around a corner, or that I’d hear him at the fridge getting ice. I kept waiting for that moment to be spooked, see a shadow, hear a voice. But it was quiet. As the clutter finally cleared, fresh paint got on the walls, and windows were washed, the house seemed to exhale, and sunlight found its way back in. I started remembering that I had once loved this place. But I also felt like Rodney was still there, digging in his heels.

The day the sale closed, I dragged one last bookcase to the curb. Taking another look inside, something nudged at me to open the barware cabinet in our Mexican-tiled kitchen. I heard myself gasp: It was empty except for one Day of the Dead angel sitting on the bottom shelf — with a broken wing and covered with cobwebs, along with a few dead termites.

Rodney used to take forever to finish anything: It would take him 45 minutes just to make a sandwich, and he never once paid a bill early. But he always came in under the wire, and the same was true for haunting me. In that last minute, as I was struggling to say goodbye, he liberated me. I snatched up the angel and its wing, walked out without looking back, and took him home to find some glue.

Katrina Brown Hunt is a writer and editor based in San Diego. Her work has appeared in magazines and web sites ranging from Travel+Leisure to TV Guide, Mental Floss and Caviar Affair.