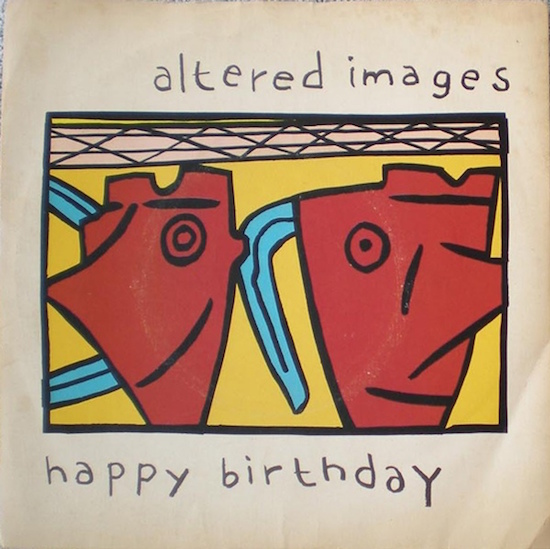 One of 25 installments in a series of posts analyzing and celebrating a few of our favorite New Wave songs from c. 1977–1982. Josh Glenn’s series introduction is here, and you can listen to the QUIRK YOUR ENTHUSIASM playlist here. Enjoy!

Should pop songs make you happy? Should you trust their promise of happiness, or the happiness they do bring? is it girlish, or childish, to think so? “Happy Birthday” is a good pop song because its slinky guitar riff and warbly vocal can follow you through the day, but it’s a great one because it gives those questions all the right answers: yes, but also no, and then again maybe. It starts with a big seesaw of a melody on an early 1980s synthesizer’s marimba, unless it’s a heavily treated six-string. The same melody will guide Clare Grogan’s flirty, breathy vocals, but even before we’ve figured that out the marimba meets its match in Tich Anderson’s pounding tom-toms and in the dry, propulsive paired guitars: half the band’s playing accusatory, ironic punk pop that could have belonged to the Undertones (“More Songs About Chocolate and Girls”) and the other half (Grogan and whoever’s playing those keyboards — producer Martin Rushent?) could be playing, frankly, children’s music.

This band offers hope, freshly rescued from somebody’s childhood, but is it real? Can you believe it? Can you make yourself believe it? Can you wish yourself — now that you’re old enough to ask such questions — a “Happy Birthday,” or are you doomed to nostalgia for childhood happiness, and for anything else that could resemble it?

The video might help you answer the question — there’s a set table, an outdoor fancy dinner, and Grogan doesn’t kick it over, but she’s not interested in the food: she’s waiting for boys. It’s like a slice of life from a New Wave bat mitzvah, if people really enjoyed their bar and bat mitzvahs. (She’s also collected what must be a baker’s dozen cubist birthday cards.) Happiness, the music says, seems simple and natural but really it’s artificial, it takes work, which sounds like a drag until you realize that sadness might be artificial too. Why not try happiness? Instead of pining after, or resenting the very idea of, the manic pixie dream girl™, why not become your own? “Happy Birthday” could mean anything from “celebrate the good times” to “fuck you,” and Grogan repeats the line so often that she could make it mean all those things in turn, but finally the sarcasm lifts; the sense of hurry, and the carpe diem, remain.

The rest of the original video shows the adult Grogan winking — behind her delightfully frouffy New Romantic bangs — and looking right past the people who think she’s kidding when she sings, before and after the chorus (which is just the title), “If they were me, and I was you, would you like to party too?” That last phrase nearly dissolves in a puddle of vowels: it’s never clear whether she’s inviting us to hang with her, or to be her. Nor is it clear what birthday prompts the song: yours? hers? did someone turn 12, 22, 42? What is clear is that she has found, by force of will, by practicing, by singing along with that keyboard, her own self-conscious revision of childhood happiness: you might be able to catch it — but you have to try.