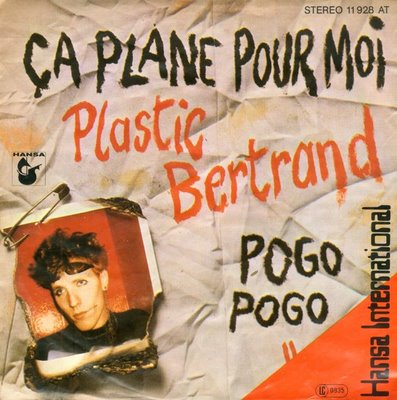 A good 15 years before the East Coast/West Coast rap wars there was New Wave versus No Wave, which played out among micro-societies in US college towns and suburban neighborhoods. Basically it came down to fun vs. no fun. New Wavers wore colorful, shredded rag-bag clothes and exuberant hennaed hair; No Wavers wore crisp, fitted, monochromatic outfits and shaved their heads. No Wavers stood erect and smoked; New Wavers affected a broken scarecrow posture and weren’t afraid to spaz out. No Wave bands (DNA, Teenage Jesus and the Jerks, 8-Eyed Spy) implied a grim intellectualism; New Wave was saucier: the B-52’s, Ian Dury, Talking Heads. Swept into the New Wave mix by default was PLASTIC BERTRAND (born Roger Marie François Jouret, 1954) and his frantic, kinetic 1977 single “Ça Plane Pour Moi” (born “Jet Boy Jet Girl”). Saxophones that vroomed like tissue paper over a giant comb, compelling Belgian-French slang lyrics, the occasional English phrase to yell out while dancing — “I am the king of the divan!” — we didn’t know who the hell this person was, but we loved him. And now you know which side I was on.

READ MORE about those born on the cusp between two generations. Plastic Bertrand was born between the Blank Generation and the OGXers.