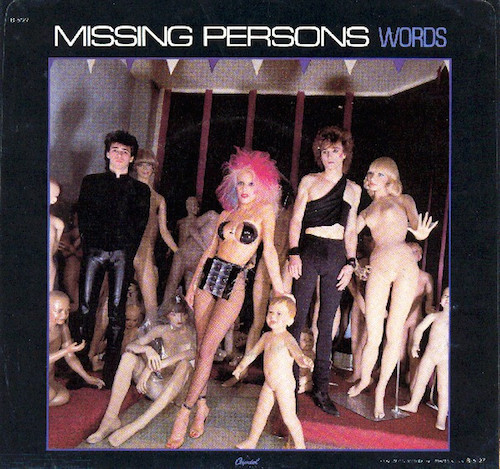 One of 25 installments in a series of posts analyzing and celebrating a few of our favorite New Wave songs from c. 1977–1982. Josh Glenn’s series introduction is here, and you can listen to the QUIRK YOUR ENTHUSIASM playlist here. Enjoy!

Long before MTV came to my neighborhood, we watched Solid Gold, where bands lip-synched their songs and the embarrassing Solid Gold dancers gyrated to them. It was the stuff of sleepovers with my best friend, and it was what introduced me to New Wave. One summer night in 1982, when I was 10 years old, I watched Missing Persons perform “Words.” It was one thing to hear the song but another to see it, and it was this seeing that changed everything.

The segment started with the camera peering through the drums at Terry Bozzio’s face, heavy blush drawn on his cheeks. Over four bars of Warren Cuccurullo’s driving guitar chords and Patrick O’Hearn’s gorgeously claustrophobic bass line, the camera panned across them, in loose suits with no shirts underneath. It all stopped at vocalist Dale Bozzio. Her hair was white floss with red, pink and blue streaks, her dark brown eyes lined black, a beauty mark on her right cheek, and expressions moving between scowl, ditz, and cyborg. She wore a clear plastic coat and over her breasts, were they fishbowls? — clear plastic balls cut in half, partly lined with something that looked like aluminum foil.

“Doo you heah me? Doo you care?” she mouthed into a tiny lollipop at the end of a wand, scowling at the camera, as the keyboards chimed along with her vocals.

“What is this?!” my best friend Gretchen gasped. “I hate her.”

“I think I love her,” I said, eyes wide, not quite able to swallow.

“My mouth is moving and the sound’s coming out — ah!” sang Dale Bozzio, finishing the line with a squeal, then forcefully delivering the next lyrics from her gut, punctuated by guitar licks and an eerie keyboard line floating above the band. “What are words for/When no one listens anymore?” she tilted her head, singing into the lollipop. “When no one listens, there’s no use talking at all.”

I felt wobbly, a little sick, and totally fascinated. “Words” instantly became my favorite song, and when it came on local station WLOL, I cranked up my clock radio so loud that the song was too distorted to hear. When Missing Persons played First Avenue in Minneapolis, I asked the only 19 year-old I knew if he was going to the show. (He was.) When I stood in front of the TV that July night watching Dale Bozzio, I didn’t know if I was looking at a woman, or an alien, or sex. It was probably all of those things. It felt like the future, and it turns out, that’s what it was too.

Molly Wright Steenson is a professor at Carnegie Mellon School of Design who works on the history of interactivity through an architectural-meets-computation-and-AI lens. She was an early web geek and co-founder of the feminist webzine Maxi.