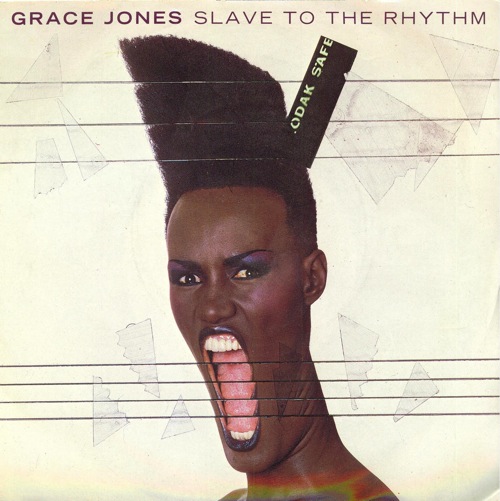 GRACE JONES (born 1948) hits the keys of the collective consciousness time and again, and it takes just the right notes to call her forth to embody each era. Rising to the cadence of disco, reincarnated by the murmur of art-house performance-pop and transubstantiated on the frequency of 21st century electro-cult, Jones is the take-charge genie who makes all your dreams come true and shows how much bigger you could wish. A rock priestess in the vestments of hyper couture, she brings down the spirits of rhythmic abandon and cutting existential insight with every bizarre runway headdress and designer sarcophagus. In your face and way below the surface, with redemptive flamboyance, bitingly ironic racial iconography and cross-sexual drag, intoxicating sound and spectacle and utter intellectual control, Jones recolonizes mass-media stagecraft for the Carnival ritual of her Caribbean roots and burlesques the chic exoticism of her Josephine Baker lineage, saving some subtextual spotlight space for the misery that gives rise to such release. Lady Gaga’s two-hundred-volume fashion statement has Grace Jones’ catchy critique as its sacred text, and many more young minds may have been marked, when Miss Grace appeared on Pee-wee Herman’s Christmas special as a crated, living windup doll to sing a suggestive carol. Sensual and mechanized, troublingly shackled and deliriously unleashed, self-mocking and supremely self-assured, it was a definitive Grace Jones moment: she’s the perfect package, and there’s no box she thinks inside.

On his or her birthday, HiLobrow irregularly pays tribute to one of our high-, low-, no-, or hilobrow heroes. Also born this date: Pete Townshend, André the Giant, and Joey Ramone.