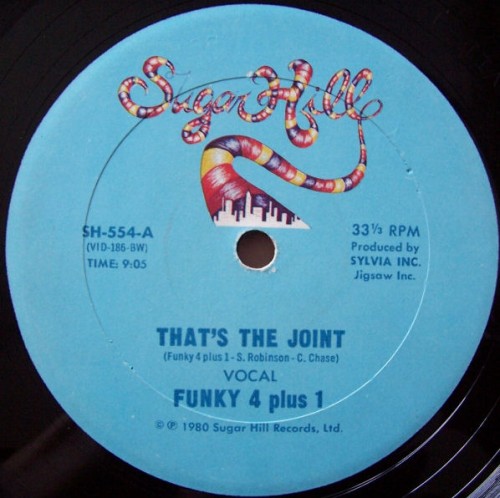 Sixth in a series of posts analyzing and celebrating old-school hip hop.

I had never heard anything like “That’s the Joint” when it came out. That can probably be traced to the fact that I lived on a cow farm in Mississippi, but it also had something to do with the year or so I had just devoted to catching up with the history of what was not yet called “classic rock,” as it was defined by the first generation of rock critics, who were twice my age. The song bubbled over with happy energy and youthful high spirits, and it just kept bubbling for almost nine and a half minutes. It was several seconds longer than the Who’s first rock opera, “A Quick One While He’s Away,” but instead of dazzling the listener by transitioning from one tuneful fragment to the next, it was like a balloon that five kids were determined not to let hit the ground. If the stuff I’d been catching up with was about seeing how much cleverness a simple form can support, “That’s the Joint” was a demonstration of how revolutionary simplicity can seem.

Not the least revolutionary thing about it was the way the rappers — five people whose enthusiasm belied the fact that they were professionals who’d been doing this for five years — embraced their mission to “get funky, to make money!” Putting themselves out there with their “golden voices and hearts of steel,” they won’t object if anyone needs to call what they do “art,” just so long as they get paid. The older rock critics I was reading at the time had come up thinking of popular music as a liberating political force, and they had begun to grapple with the question of how people who made music that had touched them deeply could, as they got older, make embarrassing hack work intended to keep pace with changing market trends. Trying to explain the career of Rod Stewart, the best that Greil Marcus could come up with was, “If it was necessary to become a great artist in order to get the money to spend and the stars to fuck, well, Rod was willing.”

More than 30 years and a couple of financial collapses later, hip hop has fully displaced rock as the living center of popular music, in terms of both musical innovation and cultural impact. And it’s dominated by a handful of greatly gifted, charismatic artists who dress a lot better than Rod Stewart, and have given every indication of aging more gracefully — but who, no matter what is going on around them, have shown a dismaying inability to remain long distracted from the subject of how rich they are. Knowing what was coming, and not just in hip hop, I listen to the Funky 4 + 1 chant eagerly about how much money they hope to make, and I can’t get over how un-sinister they sound. Which is why they make a better case for ’80s nostalgia than Ronald Reagan or hair metal.

See All Posts by Phil Dyess-Nugent

Phil Dyess-Nugent is a freelance writer living in Texas. He is a regular contributor to The A.V. Club and Critics at Large.