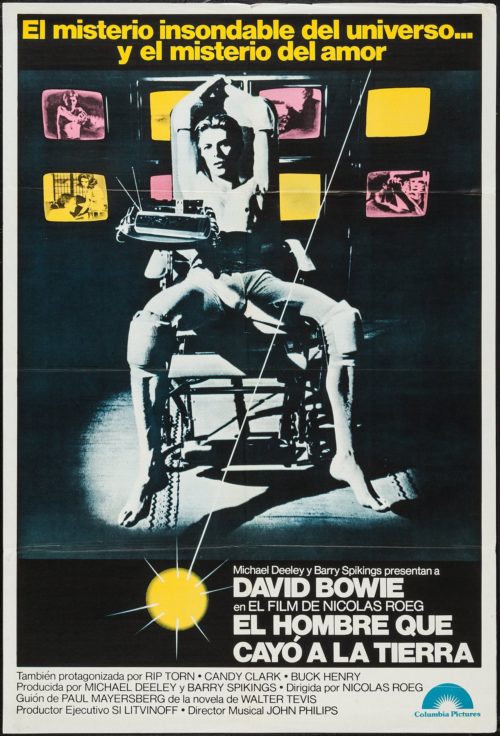 What I find most pleasurable about The Man Who Fell to Earth (TMWFTE) is that it’s more than just a science fiction film, it’s an identity fantasy that draws you into David Bowie’s otherness, allowing you to put on his skin and experience it from all angles.

Otherness was a key aspect of Bowie’s stage presence, and it’s impossible to watch TMWFTE and not think about Ziggy Stardust and his seductively androgynous rock star roots. But, TMWFTE pushes Bowie’s otherness further than his glam rocker persona. Bowie’s character, Thomas Jerome Newton, is literally an alien, an extraordinary spectacle. Thomas is fetishized throughout TMWFTE, the camera explores the angles of his body, the slope of his cheeks and his trippy half-dilated gaze as he trudges through American landscapes and interiors. He’s “British,” we empathize with this stranger in America, but it’s his palpable physicality that’s objectified by the camera and makes the difference. The camera can’t look away, and neither can we.

Hopeful and full of plans to save his own planet, Thomas also stands out against the cliched mediocrity of people around him, including a randy college professor, and an ivory tower lawyer, myopic in coke-bottle glasses. His lover, Mary Lou, introduces him to basic American pastimes, alcohol and TV, which, along with sex, distract Thomas from his mission and purpose.

Mary Lou provides a visual and character foil for Thomas. Who’s the most beguiling? Arguably Thomas, who is more sensitive, intelligent, vulnerable and slender than she. The comparison upends gender stereotypes and emphasizes Bowie’s appealing brand of androgyny.

Mary Lou pursues Thomas, but while she finds Thomas irresistible, she has limits. When Thomas reveals himself as an alien to Mary Lou, confronting her with otherness and challenging her to accept true difference, she retreats in fear, at least while he’s in alien form. She likes his exoticism, but only when it’s palatable and easily consumable. Through this we learn that she’s really a proxy for Bowie’s audience(s).

Later, this exploration of otherness gives over to dissection, as the authorities take Thomas away to be poked and prodded. Just as Bowie and his personas were dissected by audiences determined to penetrate the facade and find the human underneath, so is Thomas picked apart by his torturers, an experience we see from his perspective as they restrain him and peel off a nipple.

Later, doctors mistakenly make Thomas’s human guise permanent by fusing his earth contact lenses to his alien eyes. The alien’s despair about this mirrors the imagined despair of the actual artist, discovering that somehow he’s become his persona, there is no longer a membrane between who he is and who he seems to be.

Worse, he’s finally made like us, and this makes him as miserable as we are, numbed by drink and looking for a way out. As his dead planet and lost wife and children become objects of maudlin nostalgia and longing, so is Thomas’s lost self, purposeless, sucked into a vortex of meaningless excess.

This reveals the poignant truth of TMWFTE: the ways we choose to enjoy, fetishize and consume otherness can often destroy the best things about it. Some would say that’s not a pleasurable realization at all, but finding that little bead of truth in the film makes the experience delightfully bittersweet.

See All Posts by Ramona Lyons

Ramona Lyons is a San Francisco-based semiotician whose work focuses on the intersection of the visual world, narratives, people, and culture.