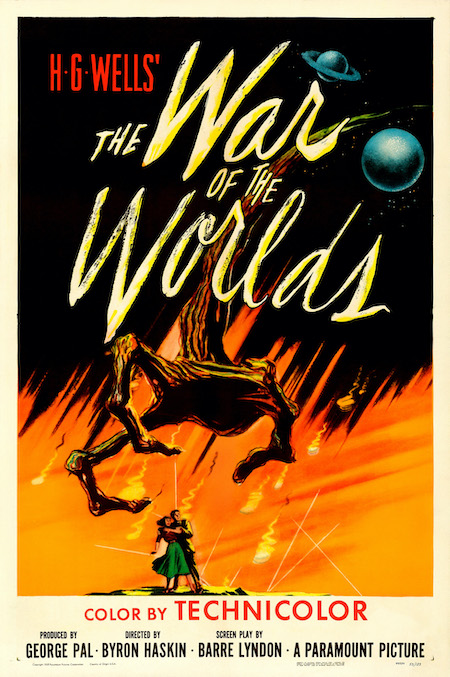 This is certainly true when it comes to this old movie. I’ve seen it hundreds of times. That’s not an exaggeration. Sometimes I watch it a couple of times a week. It’s almost unhealthy.

Some of this is due is nostalgia, of course. I loved it as a child because it is a very intense and scary film. I waited desperately each year for it to show up randomly in the TV Guide or on late-night TV. More importantly, it might be because I saw it for the first time with my father and that’s a rare memory for me. I can hardly recall anything we sat down and watched together on our old black-and-white. He let me stay up to see it and stuck around without wandering off to bed. I think he enjoyed it. I know what I felt. Riveted. Terrified. Certainly, I will never forget just how intensely frightened I was when that Martian eye first appeared from the meteor and disintegrated those deputies. The throbbing sound of the heat ray as it warms up… ZUM ZUM ZUM… I still feel a visceral shiver just typing this out.

All this doesn’t explain why I watch War of the Worlds so much, though. Lots of films scared me as a kid — certainly the Wizard of Oz scared me more — and if I wished to recreate times with my dad, it wouldn’t be old TV that I’d look to. No, It’s something else that draws me back. Something within the movie itself. Somehow this old end-of-the-world movie gives me comfort — it makes me feel safe. When you strip away the genre elements of the film (Martians, spaceships, heat rays), you are left with other tropes that are more essential. It’s really a small-town bucolic mixed with a meet-cute romance. And it’s a war picture, too — but I’ll get to that in a minute. For such a special-effects extravaganza it’s surprisingly a rather small film. Square dances and farm houses and many scenes of just-folks glued to the radio. There is a lot of talk about family. In fact, the romance between Silvia and Dr. Forester is actually more about establishing a new family than about romantic love. He never kisses her, not even once.

The other essential element (the war picture stuff) is that this movie was made in that short era after WWII when the military were still seen as the good guys. And even though the army isn’t up to the task of stopping the Martians, all those confident men in uniforms (soldiers, generals, police, firemen, Civil Defense, etc.) create a safe and protected feeling for the viewer that everything will be all right. The idea that civil society will handle everything responsibly may be a postwar thing that has entirely ceased to exist for us. Kind of like when you were a kid, how you thought your dad could do anything. Only later, when you started to grow up, did you find out about those feet of clay.

See All Posts by Seth

Seth is the cartoonist behind the long-running comic book series Palookaville. His books include Wimbledon Green, George Sprott, It's a Good Life If You Don't Weaken, and Clyde Fans. He is the designer for The Complete Peanuts, among other projects and from 2014 to 2016 he partnered with Lemony Snicket on the All the Wrong Questions series.