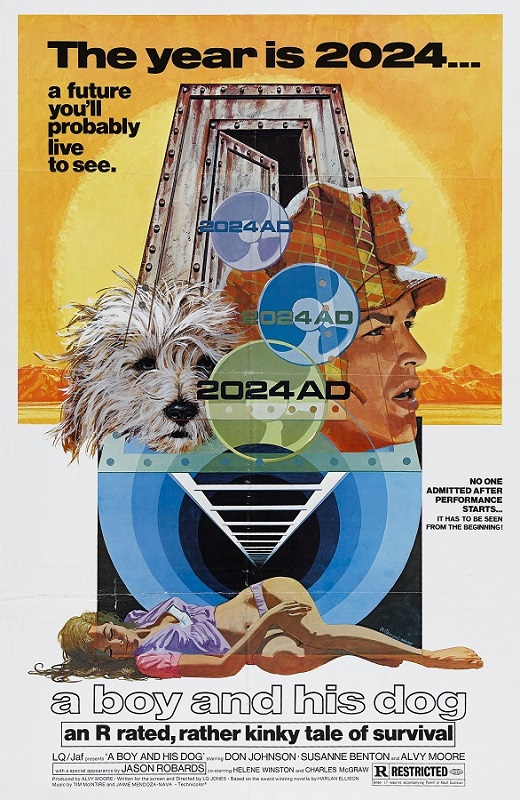 Have you ever had to choose between your lover and your dog? What about your dog that is not just a dog, but a telepathic dog with special powers to sniff out people for you to rape? And your lover is not just your lover but someone who you raped, but who liked it a whole lot — and who really was tricking you the whole time, using herself as bait to lead you to an underground city named “Topeka” where everyone wears white clown makeup and where they want to milk you for your sperm?

This is a tough decision!!! But one that the boy, Vic, or Albert, as his dog calls him, has to make at the end of the movie.

The dog is named Blood. He’s fluffy and his lines are performed by a man with a deep voice and the vibe of a prissy uncle. Each line sounds like a voicemail being played over the dog’s not very expressive face. I recently finished writing a script in which there are characters with a telepathic connection, and seeing it done here gave me pause (or I guess I should say ‘paws,’ since the telepathic dog was very fond of bad puns).

There’s a book by Mikhail Bulgakov, Heart of a Dog, in which a Frankenstein-like doctor, a member of the intelligentsia living in Soviet times, takes a street dog, implants some human glands in it and the dog turns into a man — an unpleasant, impulsive member of the proletariat, with a gambling and sex addiction, who goes to the circus daily. The dog man is a satire of the communist society it sprang from. But in A Boy and His Dog, I think we are meant to see the dog as the movie’s moral center. He sniffs out women for the boy to rape, yes, but he also corrects the boy’s grammar and helps him survive in the desert wasteland that is the earth after the nuclear holocaust of World War IV.

The movie ends as the boy (played, by the way, by a young Don Johnson) has to make his choice: he goes with bro before ho, and cooks his lover and feeds her to his hungry dog. The last line of the movie is the dog saying: “Well, I’d say she certainly had marvelous judgment, Albert, if not particularly good taste.” This line, apparently really pissed off Harlan Ellison, the writer on whose novella this film was based. He thought it was “moronic” and “chauvinistic.”

I think if I had seen this movie as a younger person, I would have found a way to press my self down more in order to make space in me so that I could align myself with the boy — even as it starts with him finding a woman who is bleeding out to death after being brutally gang raped, and he laments the wastefulness of this, because she could have had two or three more rapes in her if they hadn’t slashed her open. We are meant to understand that this is a brutal world, and boys will be boys.

I wonder if some of the movie’s misogyny weighed on the director and he felt a need to make amends, because he attempted to make a sequel that was going to be called A Girl and Her Dog. However he couldn’t find the funding for it

Well, in the words of the boy after he has been captured and brought before the underground Committee: “Suck wind, wet brain!”

See All Posts by Katya Apekina

Katya Apekina writes fiction, screenplays and radio dramas. Her debut novel, THE DEEPER THE WATER THE UGLIER THE FISH, came out in 2018.