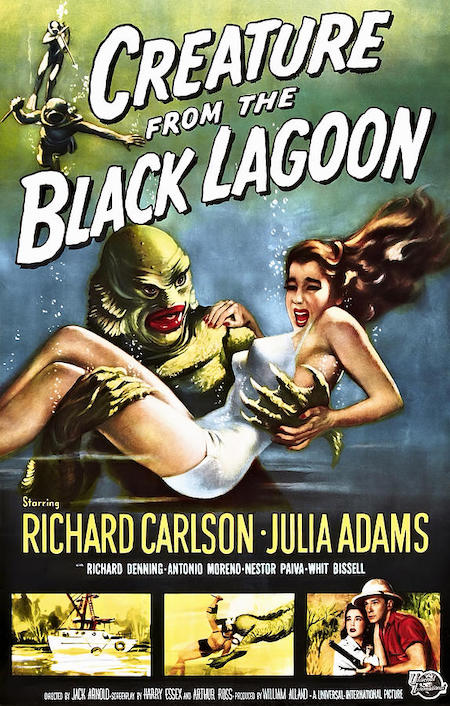 It all began at a dinner party during the making of Citizen Kane, for which William Alland, one of the faceless reporters in the dark querying Kane, was an invite. Orson Welles also brought Mexican cinematographer Gabriel Figueroa, who told a remarkable story of a half-human, half-fish which he swore lived in the Amazon. Alland remembered this tale when he was at Universal in the early 1950s and it inspired the film he would develop and produce, The Creature from the Black Lagoon (1954).

In readying his project for the screen, Alland went through a pile of screenwriters, and it’s unclear which should get credit for what. Who thought of cribbing from King Kong the theme of Beauty and the Beast? Or of a geological expedition searching for fossils in Brazil from the Devonian age? It’s certain that a writer, Arthur A. Ross, was responsible for an eco theme. He’d been reading Jacques Cousteau, and, in inspiration, one of the scientists on the expedition, Dr. David Reed, wants to save the one-of-a-kind Creature from extinction. His rival, Dr. Mark Williams, a swell-headed martinet with Ahab tendencies, schemes to harpoon the Creature with a spear gun.

The scientists are played blandly by TV’s Richard Carlson (I Led Three Lives) and Richard Denning (Mr. and Mrs. North), and they could easily have switched their roles. But what’s made the movie for me since boyhood is actress Julia Adams. She’s Kay, fiancée of good guy David and a scientist also. But Adams was cast by filmmaker Jack Arnold (The Incredible Shrinking Man) for one major reason: to bring in an erotic element. I felt it at 10 and I think it now: Adams with her dark eyes and dimples is gorgeous. And she is shapely, why, even on the mosquito-plagued Amazon, she was often on view in short shorts. And in what surely are alligator-infested waters, she was fitted in a sensual white bathing suit for a blithe Esther Williams-like swim.

Sorry, female readers! The Creature from the Black Lagoon wasn’t made with you in mind but for male gazers of all ages. In a steamy three-minute sequence, we join the Creature’s POV under water as we watch Julia float over us. Hot stuff! We are with the “Gill Man” when Julia comes by on her stomach and the fishy humanoid below her turns on his back in a ballet of aquatic coupling. Did I get all of this when I was a kid? I certainly was there when, in another scene, a clawed arm comes out of the wetness to grab at Julia’s luscious leg.

It’s underwater, the Creature’s domain, where the id runs free. In contrast, the on-ship all-human relationship between David and Kay is completely flaccid. They peck at each other for a kiss. They giggle coyly because they plan to wed. I think every viewer worth his salt wants Kay dragged away by the turned-on Gill Man. Dream on! Such was impossible in a 1950s Hollywood film. It took until 2017 for Guillermo Del Toro to have an amphibian being and a woman race off together in the, alas, far less sexy The Shape of Water.

See All Posts by Gerald Peary

Gerald Peary is a long-time film critic for the late Boston Phoenix and now for The Arts Fuse. He’s the programmer of the Boston University Cinematheque and the filmmaker of three feature documentaries: For the Love of Movies: the Story of American Film Criticism, Archie’s Betty, and The Rabbi Goes West, the last co-directed by his wife, Amy Geller. He acted in the indie “cult” movie, Computer Chess.