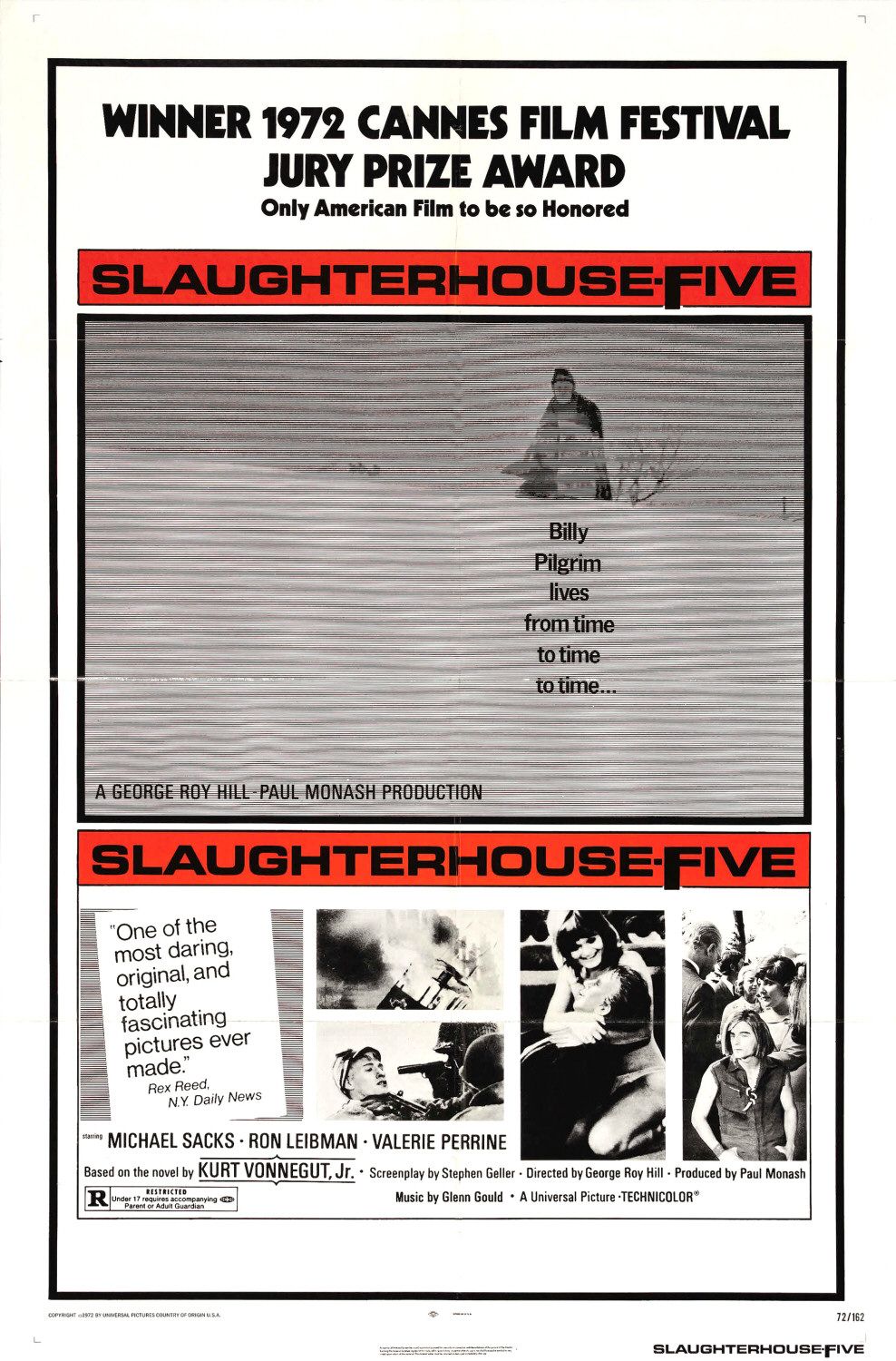 In the first chapter, Kurt Vonnegut writes that his breakthrough in writing the book after struggling with it for twenty-three years was when he visited his old war buddy Bernard V. O’Hare, who’s wife was appalled that he was writing a story that would inevitably glorify war and have a Hollywood ending. “You’ll pretend you were men instead of babies, and you’ll be played in the movies by Frank Sinatra and John Wayne or some of those other glamorous, war-loving, dirty old men. And war will look just wonderful, so we’ll have a lot more of them.”

Vonnegut promises her that he will do no such thing and he keeps his word: the book is an unhinged trip through the mind of its damaged antihero, Billy Pilgrim, a befuddled, inert character who jumps in time in and out of his experiences as a soldier in World War II and later as a small-town optometrist who gets abducted by aliens from the planet Tralfamadore. No bugles for war can be heard.

As a book, it works. And when I was seventeen, the film was one of my favorites; I wasn’t the only teen who had a thing for alienated heroes bewildered by human existence. Now, though, I see the film as a beautiful failure, because, at its core there are several poison pills. And it’s not that there is no such thing as an effective antiwar film. The devastating Soviet movie, Come and See and Stanley Kubrick’s Dr. Strangelove are two of my favorites.

I’m writing a book about the book Slaughterhouse-Five and so I tracked down its screenwriter, Stephen Geller, who told me he was flummoxed by his task of adapting it. He complained to his producer, “The hero isn’t interesting.” The producer suggested he call Vonnegut, so he did. He asked Vonnegut if he had any pointers and all the author could muster was that Pilgrim loved his dog and his car. “I wanted to shoot myself,” Geller recalls.

I think Geller did as good a job as he could. But, crucially, what makes Vonnegut’s story work is the presence of Vonnegut himself. His first-person authorial voice in the first and last chapters of the book, as well as four crucial interjections sprinkled in Pilgrim’s story, are what make Slaughterhouse-Five a metafictional masterpiece.

And as if that wasn’t enough going against the film, there’s Michael Sacks, the wooden actor who plays Pilgrim. When we imagine a totally dull, inert character, it’s possible to follow him or her through a book. But when we watch an actor inertly play an inert character, he falls flat. Oh, and did I mention that he ages on screen with a makeup job that is laughably bad to 21st century eyes?

If there is still something lovable about the film, it’s primarily that it is an awkward extension of Vonnegut. Wouldn’t you know, the unpredictable, irascible author loved the movie! With his books, he managed to infect the world with his utterly unique off-kilter, critical-yet-loving mockery. But that didn’t translate onto the big screen. In fact, all of the movie adaptions of his books are considered failures. There’s something very Vonnegutian about that.

See All Posts by Tom Roston

Tom Roston is a journalist who worked as a Senior Editor at Premiere Magazine for ten years. His books include The Most Spectacular Restaurant in the World and I Lost It at the Video Store.