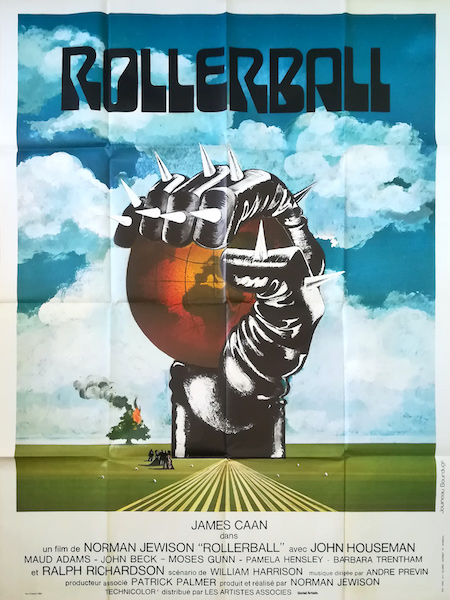 James Caan is playboy athlete Jonathan E., a man of unnatural talent for a violent game created to demonstrate the futility of individual human achievement. John Houseman co-stars as starched plutocrat Mr. Bartholomew, owner of The Houston Team for which Jonathan plays. The sport of Rollerball is presented in the film as an essential gladiatorial spectacle made for the masses but expressly not meant to produce heroes like Jonathan. To that end, in the first act, Jonathan is told it’s time for him to retire. He’s survived ten years in the game, longer than any player in its history. Wherever he goes people chant his name “JONATHAN! JONATHAN! JONATHAN!” But Rollerball exists to churn through players quickly (before fans can get on a first name basis with one) via spiked gauntlets, exploding motorcycles, and a high velocity steel ball shot from a cannon capable of ripping a player’s arm off should he reach for it too soon.

“It’s not a game man was meant to grow strong in,” Bartholomew fumes as the two luxuriate in the boss’s executive meditation suite. “The team needs me,” Jonathan all but whispers. No. The decision has been made. Our hero pushes back, raising a tentative curled finger in protest as he timidly reminds Bartholomew that “an executive took my wife.” Here’s the top macho man on the planet, and apparently an executive can just “take his wife.” Really underscores the sorry state of manhood in the world of Rollerball. Or womanhood, for that matter. In the course of the film we see a series of women come and go out of Jonathan’s cushy life of privilege. Some taken from him, others sent in as pretty replacements, on assignment it seems.

“All we have ever asked of anyone ever is not to interfere with management decisions. It’s a stupid game, you ought to be glad to be out of it.”

Jonathan becomes determined to find out who is pushing him. He resolves to learn a little something about something. Like a child who doesn’t know quite what the question is, let alone the answer, he heads to the library in search of a book about “how corporate decisions are made, and who makes them.” He is informed that all the books have been digitized and summarized, which should be good enough for him. Suddenly you’re watching a film about the disappearance of physical media.

Rollerball is a film of contrasts, juxtapositions of tone, and attention to detail. Stylish yet brutal. Action-packed, yet with room to breath, think, and explore an idea or two between skull bashings. André Previn’s score alternates between gothic organ renditions of Bach, Shostakovich and Tchaikovsky, spooky “corporate anthems,” and the squealing Moog groove of “Executive Party Theme,” creating a weirdly timeless soundtrack. (Speaking of the executive party scene, that’s a short film unto itself, culminating in an appalling demonstration of the lengths to which the drug-addled elite will go to borrow a feeling in the pre-dawn hours.)

See All Posts by Shawn Wolfe

Shawn Wolfe is a graphic designer and recovering brand fetishist from Seattle, Washington.