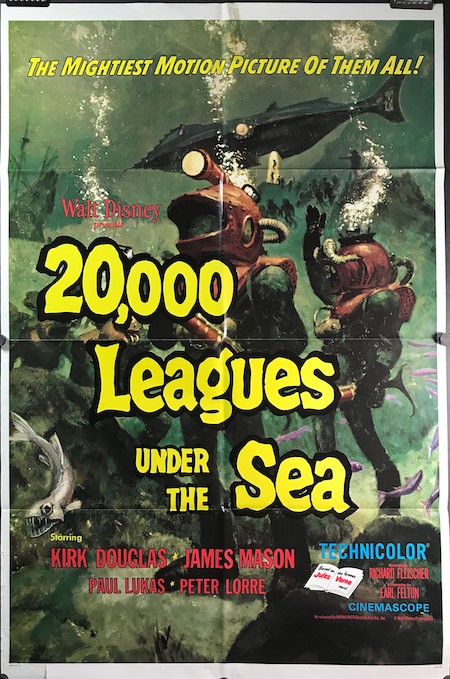 I couldn’t tell you who wrote or directed Walt Disney’s 20,000 Leagues Under the Sea if $100,000 was on the line in Final Jeopardy! but I don’t give a shit about that. The film made a huge impression on me as a kid when I saw it one summer at the Wilma Theater in Coeur d’Alene, Idaho, with my brother and my five cousins (in an early 1970s reissue, no doubt). We sat close and the movie did that thing that only movies watched in the cinema can do: it overpowered my senses. 20,000 Leagues Under the Sea had a bit of everything in it, including sharks, shipwrecks, harpoons — did I mention sharks? — and a huge rubbery squid and bloodthirsty savages, along with Kirk Douglas swimming and swaggering and shaking his ass (while he sang a tune, no less) in a true movie-star turn. It was the first film that I remember going to without my parents, and the feeling was beyond thrilling — buying the ticket, purchasing the concessions, watching the waterfall curtain rise, and being literally overcome by the shape and size of the images and the music and the visual effects. I didn’t even realize how great the supporting cast was or how much money the film returned at the box office; I just found myself feeling like I was actually there, underwater or on the beach or in the Nautilus itself. And Captain Nemo, with that velvety voice and his graying beard and his turtleneck (I mean, it was James Mason, for God’s sake), was a new kind of character for my young, unformed moviegoing mind: Was he the hero or the villain? I wanted to like him but he kept doing questionable things… only years later did I realize he was a Technicolor cut-out of the idea of an antihero that would soon flood screens both large and small for decades to come. The film was made in 1954 and was well ahead of its time in terms of art direction and special effects (it won Oscars for both), along with it being a prime example of compact storytelling and good old-fashioned escapism, 1950s style. More important than the rest, however, is the simple fact that 20,000 Leagues Under the Sea was just a great afternoon at the pictures, one that I’ve never forgotten to this day. Even now, whenever I stumble upon it on TCM or some other tv channel, I watch it in its entirety. It’s that good — or, at least, it means that much to me.

PS: Just for the record, the film was directed by Richard Fleischer (Soylent Green, Fantastic Voyage, Conan the Destroyer), and adapted from the Jules Verne novel by Earl Felton.

See All Posts by Neil LaBute

Neil LaBute is a writer and director for television, film, and stage.