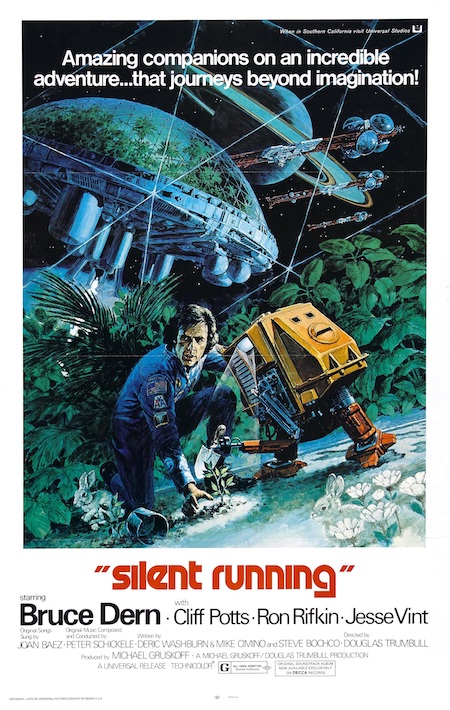 I was raised on requiem; the entire 1970s, economically austere, militarily precarious, environmentally collapsing, felt like one long funeral for the future. At 7 or 8, I didn’t know the difference between bearing witness and merely watching, but endangered-species documentaries like Say Goodbye and extinction-themed full-length cartoons like Last of the Curlews kept me in a consistent mood of dutiful mourning. And none more so than the end-times sci-fi parable Silent Running.

I can’t think of this movie without the first teardrop piano figure of Peter Schickele’s haunting score playing in my head; director Douglas Trumbull composes the movie in expansive sensory swaths — long takes, celestial vistas, often wordless — that soak into the mind on a lived-experience level. We’re walking the paths of a paradise which has itself been cast out: the last forests of our paved-over planet, shot into space supposedly for safe keeping, in vast biodomes floating in the outer solar system. Tended by naturalist Freeman Lowell (Bruce Dern) and staffed by uncaring bros who symbolize everyone else on Earth, the balance is delicate, and then tips over when the order comes to simply nuke the trees instead of bringing them home to re-green the world.

The story soon becomes a Last Man narrative, carried with heartbreaking conviction on Dern’s shoulders, when Lowell desperately kills his crewmates, fakes a disaster and looks after the one remaining dome while trying to convince Mission Control that the ship is stranded and should be heroically left behind. Seventies cinema often tried escaping to the past, in self-exiled mountain-man stories like Grizzly Adams and Jeremiah Johnson, but the world ahead of us has made Lowell such a misfit that he has to leave the planet altogether and take the wilderness with him.

We know that the human race itself, and Lowell’s crusading type especially, is going extinct, and the film’s many lapses in logic (If the domes are pre-fitted for bombs as we see, why did anyone believe they were made to save the forests at all? If Lowell’s such a born gardener, why does he forget that plants need sun when the ship swings behind Saturn?) are swept away by the feeling of bad-dreamlike inexorability.

The film saw forward and in some ways harkened far back. Lowell’s only companions are the two “drones” Huey and Dewey, who prefigure R2-D2 and all the other cute little robots (and arguably, anthropomorphized smart-home gear) that proliferated after him; Lowell’s disputes with his unfeeling or intimidated comrades, and his ultimate choice of sacrifice to his principles, can be traced back to Antigone (which also includes sacred duties involving soil). An uncomfortably males-only version, but perhaps advisedly so, for the feminine is a strong absence throughout the film: the snapshot of an unnamed young girl Lowell feels he’s fighting for (an abandoned daughter?); the astral voice of Joan Baez in two eerie rustic-future ballads; and of course the remnants of Mother Earth herself.

The movie’s assault on nature felt all too familiar in the year I first saw it, but at least we could witness this deferred to a distant future. As I write in fall of 2019, the Amazon is burning, and kids like the girl in Lowell’s photo are taking over the streets to push that future ever farther. I’ll keep my eyes on it.