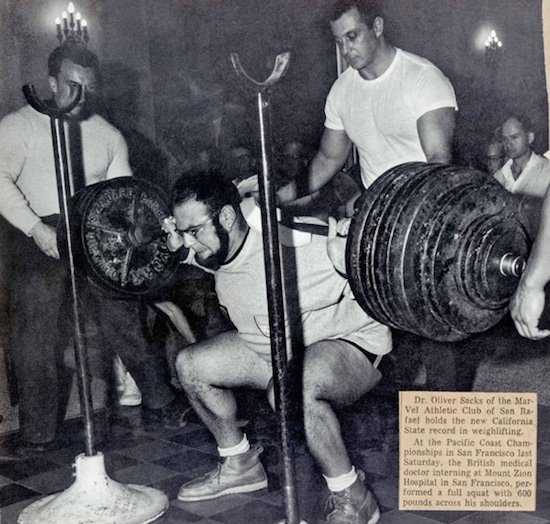 Many people hear the term powerlifting and automatically think of Olympic weight-lifting — the dynamic spectacle of the vaguely obscenely named “snatch” and “clean and jerk.” But powerlifting is a distinct sport in its own right. Its adherents train to achieve a one-rep max in three fundamental lifts (bench press, squat, deadlift). Powerlifting emerged in the US and the UK in the 1950s; traditionally a white working-class sport, it has attracted a wider range of competitors in recent years, including increasing numbers of women.

A literary history of powerlifting would have to foreground Oliver Sacks, who wrote in his memoir On the Move of the time he spent on “Muscle Beach” in the 1960s (Sacks’ lost suitcase of photographs and related ephemera may still be circulating out there somewhere, and I want to read a historical novel about a figure loosely based on Sacks training in this milieu):

Training intensively, even obsessively, at a small gym in San Rafael, I worked up to doing five sets of five reps with 555 pounds every fifth day. The symmetry of this pleased me but caused amusement at the gym — “Sacks and his fives.” I didn’t realize how exceptional this was until another lifter encouraged me to have a go at the California squat record. I did so, diffidently, and to my delight was able to set a new record, a squat with a 600-pound bar on my shoulders. This was to serve as my introduction to the power-lifting world; a weight-lifting record is equivalent in these circles, to publishing a scientific paper or a book in academia.

The modern sport is governed by a bewildering array of different federations whose splintered proliferation recalls the landscape of sectarian Protestantism in seventeenth-century Britain. I have been training to compete under the rules of the Revolution Powerlifting Syndicate’s raw classic division (wrist wraps and belt are permitted, but no knee wraps, and certainly none of the more extensive equipment — the squat suit, the bench shirt — that augment lifters’ totals in some other divisions). I love the sheer abstruse technicality of the regulations, even if I do not look forward to wearing a singlet or “onesie” and having my weigh-in number posted on the internet for all to see. I love, too, the minor superstitions of the sport — we are not allowed to touch the 35-pound plates for fear of bringing down catastrophic bad luck on the team — and the insider’s vocabulary — “Plate it!”

I have always been drawn to things that come in threes. As a child I took lessons on the clarinet, the oboe and the recorder, each of which comes with its own family of “accessory” instruments, and the great pleasure of my musical life in those days was sight-reading chamber music (transposing the viola part of a string quartet for the clarinet, for instance) in unexpected and brain-straining combinations; the English horn, the bassoon, the bass clarinet, the tenor saxophone all unfolded their mysteries in due course. When I discovered triathlon in adulthood, the challenge felt very familiar: how to balance one’s training so as not to favor strengths and neglect weaknesses, a complex dance that changes over time; the way a technique-based sport like swimming unfolds into ever more elaborate patterns and structures as one’s knowledge of it deepens. And so it is with powerlifting. Each lift has its variants — you can front squat or use the safety squat bar, there are goblet squats, you can bench close-grip or floor press or do deficit deadlifts in order to strengthen the second half of the lift. And there are those accessory lifts too — endless variants of rows and hamstring curls and lunges, not to mention the dreaded Bulgarian split squats (everyone’s least favorite exercise, but probably the one that makes us strongest, especially when we do them on a 6-second tempo descending).

The deadlift is currently my best lift of the three. I gulp down sets like 10 x 3 x 185 and 5 x 2 x 205, build grip strength with farmer’s walks and shrugs with 52.5-pound dumbbells (the heaviest ones we have — we have been given the oddball incomplete rejects of the gym for our training area) and have achieved a one-rep max of 265 (270 if you count the time I hitched it up the last bit of the way — but it would have been disqualified in competition). I love the bench press too — leg drive! — and am working towards the day when ordinary sets of multiple reps in workouts will let me put on the big plates.

The squat, though, is my nemesis. It is pitifully less than it should be — I worry about my knees, my back collapses as I come out of the hole and I fold forwards — very often (this should not be true for a female lifter) my squat sets are actually less than my bench sets, a sorry situation. But without this sort of challenge, why would one embrace a sport in the first place? Some future training cycle will come when my squat performance exceeds my performance in the other two lifts, where some technical challenge in bench or deadlift gives me more cause for concern. Without a nemesis, what fun is there in the endeavor?

See All Posts by Jenny Davidson

Jenny Davidon is a professor of English and Comparative Literature at Columbia University; she writes about 18th-century literature, etiquette and culture.