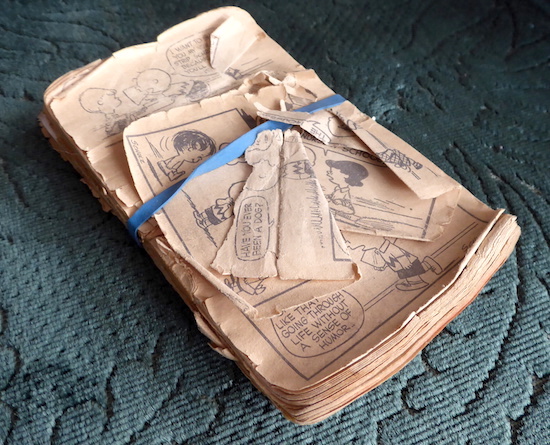 Charles Schulz’s Peanuts is the first comic strip I ever gave a moment’s thought to. From kindergarten age, I just loved it; today, I believe it’s what set me on the path to becoming a cartoonist myself.

In my teen years, although I still read Peanuts every day, my cartooning focus shifted over to Spiderman and his beefy colleagues. In my early 20s, though, I got obsessed with Peanuts all over again. Recognizing it as a brilliant body of work, I gathered up all the Peanuts collections I could find — the most common being the Fawcett Crest paperbacks that every kid in the ’60s and ’70s read.

At some point, when I was in my 30s, I stuffed a crisp copy of The Wonderful World of Peanuts (the very first Fawcett paperback) into my suit pocket and started diligently carrying it around with me everywhere. To me, Peanuts was so important that this collection was like a bible. For 15 years or so, each morning before I went out the door, I switched The Wonderful World of Peanuts from one pocket to another.

Over time, the book’s cover came off — so I stuffed them into the guts. The spine split and crumbled, requiring the addition of an elastic band. Pages tore and yellowed and frayed. The messier it got, the more magic this object acquired. If other ephemera found its way between the pages — a movie stub for The Magnificent Ambersons, a photo of my dad, neither of which I remember inserting — then I knew that removing them was taboo.

When I went to Santa Rosa to propose the Complete Peanuts book collections to Jean Schulz — which were published by Fantagraphics beginning in 2004 — The Wonderful World of Peanuts was in my pocket. Maybe that’s why it had been in my pocket for so long, in anticipation of the day when that project would be set in motion.

One day, a few years ago, I stopped carrying the book. I left it home, and that was that. I didn’t set it aside carefully, just forgot about it. However, when I came across it recently, I finally recognized the object’s power. Today it’s displayed reverentially in my studio — a mysterious relic created by routine, familiarity, and sentimentality.

In April and May 2017, we ran a Talisman Story Contest. The stories were judged by PROJECT:OBJECT’s Rob Walker and Josh Glenn, and by the legendary Annie Nocenti. Seth’s PEANUTS BOOK story was the winning entry.

See All Posts by Seth

Seth is the cartoonist behind the long-running comic book series Palookaville. His books include Wimbledon Green, George Sprott, It's a Good Life If You Don't Weaken, and Clyde Fans. He is the designer for The Complete Peanuts, among other projects and from 2014 to 2016 he partnered with Lemony Snicket on the All the Wrong Questions series.