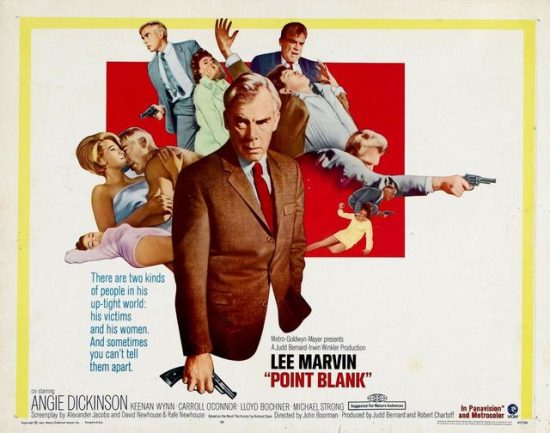 Point Blank is a condensation of a condensation, boiling down the already bare-bones The Hunter by Richard Stark (aka Donald Westlake), the first installment in the series of novels he devoted to the brutally efficient professional thief Parker. Here he is called Walker, and he is played by Lee Marvin, who embodies both the cold efficacy and the human concealed within.

There is not a wasted frame in Point Blank. All those items that often squander precious real estate in movies — atmosphere, character development, motivation, back story — are brutally pared down to essentials. The first twenty minutes set up the premise: Walker has been robbed of his share of the take in a job by a close friend, Mal (John Vernon), who has used the money to buy back his place in a shadowy Organization; Walker’s wife, Lynne (Sharon Acker), is also involved until she is killed, and she has a sister, Chris (Angie Dickinson). Much of this is conveyed through stylized flashbacks and flash-forwards, many just a few frames in length. Walker’s courtship of Lynne is a literal mating dance with a silent chorus of fishermen; it looks like a soap commercial. Walker’s and Mal’s reunion (they had been service buddies) involves their two heads reconnoitering across a sea of bodies; it looks like a beer commercial.

When Walker sets out on his payback mission, the sound of his steps down a hallway persist past the shot — it goes on for maybe thirty more seconds, but you can’t help but hear its echo throughout the rest of the picture. And the rest of the picture is a machine. In the quest for his money, Walker identifies, shakes down, and takes out executives located incrementally higher on the Organization’s totem pole, until he reaches the void at the top. These stages occur in a used-car lot, a psychedelic nightclub, a mobbed-up hotel, an office building, the L.A. River, and an executive’s vast ultramodern house in the Hollywood Hills. There, Walker and Chris undertake their own mating ritual: she attacks him, beating ineffectually on his unmoving chest, then runs through the house turning on appliances while he follows impassively, turning them off. Only after that can they take to a bed.

Primal, savage, undeceived by the modern world, Point Blank still looks more modern than most of the movies made in the ensuing fifty years with vastly more advanced technologies.

See All Posts by Luc Sante

Luc Sante's books include Low Life, Evidence, The Factory of Facts, Kill All Your Darlings, and The Other Paris.