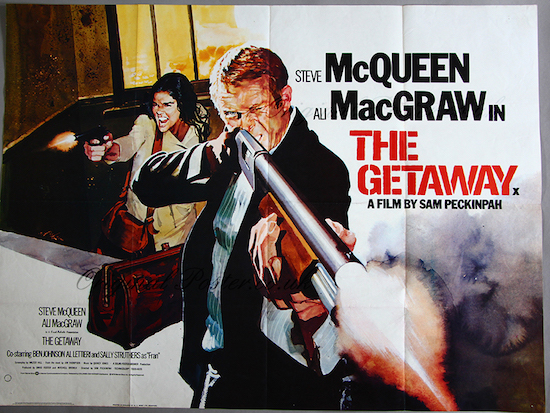 “You don’t reckon you’re gonna shoot me, are you?“ says Slim Pickens at the wheel of his battered pickup, commandeered just seconds before by bankrobbers Doc and Carol McCoy (Steve McQueen and Ali Macgraw). Carol, sitting in the middle, glances curiously to Doc on her right, her look asking, well, how about it, are you?

There’s been major firepower, a high body count, and much perversity, and now with the dragnet underway, Pickins and his beat-up truck are the last hope for the couple to make the eponymous getaway across the border into Mexico. They’re still holding the loot.

In heist stories the rip itself is the easy part. Holding on to the loot is hard. And the hardest part of that is dealing with the double-crosses — even though every fink betrayer seems to have quite clearly signalled their intentions from the outset.

Even by Jim Thompson’s deep noir standards, the novel of The Getaway is extreme: mythic, realist and unfathomably perverse. Thompson writes his protagonist Doc as a charismatic psychopath, but McQueen saw in the part a chance to play a Bogart-like basically decent tough guy.

A young Walter Hill wrote the script, and looking back you can see plenty of him in the film. That scene with Slim Pickens (and the effusion of redemptive goodwill in the subsequent scene, when Doc tries to buy the pickup from Pickens) is pure Walter Hill. The trope of unlikely outsiders finding common cause would recur in many of the films he would go on to write and direct.

The Getaway did well at the box office but director Sam Peckinpah was dismissive of it. Author Jim Thompson was disgusted with the revisionist plot, especially the new ending. But I’ve always found the film pretty satisfying: as a color-saturated follow-up to The Last Picture Show (which it was meant to vaguely resemble), as a weird and twisty road story, and as an of-its-time shoot-fest with utopian inflections. And despite the general sanding back of Thompson’s hellish characters and abyssal story turns, there’s still plenty of noirish astringency there.

So, back in the truck. Carol and Slim are waiting for an answer. Doc looks across at them, shakes his head in disbelief. “I kind of doubt it,” he mutters, with weary disgust — at himself, at the situation, at the total absurdity or eminent plausibility of the question, you can’t really tell.

See All Posts by Peter Doyle

Peter Doyle is an Australian author whose books include The Big Whatever, Crooks Like Us and City of Shadows: Sydney Police Photographs 1912-1948.