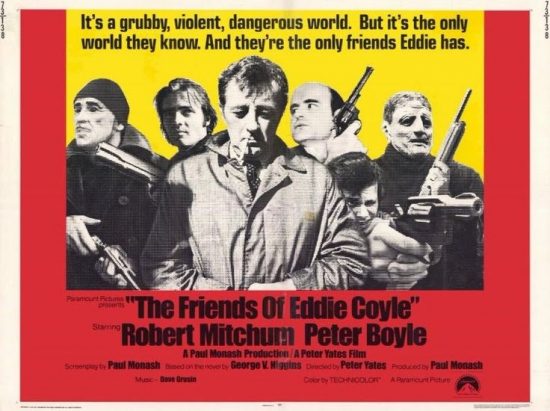 The Friends of Eddie Coyle is at least as much about Eddie Coyle as it is about his friends, though his friends are essential to the moral dilemmas that swirl around them and through the story. In what is rightfully regarded as one of his finest performances, the 50-year-old Coyle is played by the 56-year-old Robert Mitchum, as a broken blue-collar worker and amateur low-level criminal who has hit the wall and knows it.

The gangster/heist genre scaffolding is a way of getting at the truth of Coyle and his predicament, but it’s Coyle that the movie is about, and it’s Mitchum who carries the load (though he is surrounded by some of the best character actors of the period). Coyle is facing a minimum of two years in prison for trucking illegal liquor. He has a wife and a daughter; he’s been in prison before and he can’t do the time. It’s a credit to Mitchum’s authenticity — his exhausted but defiant demeanor — that we believe him.

Are Coyle’s betrayals a matter of choice or circumstance? Obviously, it is both, but neither Coyle himself nor anyone else lets him off the hook, and this is part of the toughness of the film. He’s willing to rat out friends and acquaintances if that’s what it takes to get him out of doing time, but he’s got enough pride left to know that what he’s doing is wrong and to resent it. To this end, in his dealings with Treasury Agent Dave Foley (Richard Jordan) he bluffs, he bargains, he implores. When Foley squeezes him, like a loan shark who will never quit, for a third tip, Coyle says, plaintively, “That ain’t right,” which is true, to which Foley replies, simply, “The only one fucking Eddie Coyle is Eddie Coyle,” which is also true.

One-on-one conversations with Jackie Brown (played as a mercenary gun running hipster by Steve Keats) and Dillon (Peter Boyle in a lean, tightly controlled role) also depict Coyle as a man staring into the abyss. The best scene is the one in which Coyle demands that Brown get the guns he needs by the next day — or else — in a deftly written monologue. But the “or else” is if not hollow, slightly equivocal; we don’t know if he can follow through and we don’t think Coyle knows, either. This is not the melodramatic, nourish, almost cartoonish menace of Max Cady, Mitchum’s character in Cape Fear, but the desperate and fearful threat of a flesh and blood man whose guts are being slowly chewed up.

John Simon may have been right when he wrote that The Friends of Eddie Coyle does not rise to the level of tragedy, but it is nonetheless a fine portraiture in miniature of human frailty and moral failure.

See All Posts by Gary Groth

Gary Groth (born 1954) is an American comic book editor, publisher and critic. He is editor-in-chief of The Comics Journal and a co-founder of Fantagraphics Books.