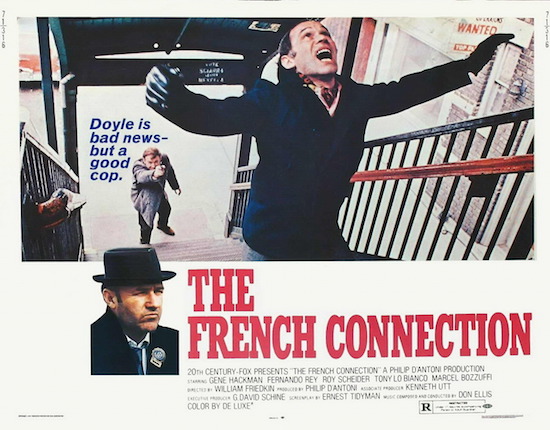 Because my parents were reticent, deluded, secretive (eventually, dead) — at any rate, unreliable witnesses to their own experience — everything I learned about their relationship I learned from period film: their courtship was Love Story, their marriage Rosemary’s Baby, their divorce Kramer vs. Kramer, and my (dead) father’s post-divorce life some derelict super-8 I found in an yellowing Zabar’s bag in the attic: Central Park (then), the Guggenheim (then), the Bowery (then): at points you can actually cross-cut between Marathon Man and my Dad’s coverage and, but for grain and color discrepancies, no-one would know. It’s like GPS for a missing Dad, pinpointing him at various spots around Mayor Lindsey’s New York.

Popeye Doyle, stumbling out of a bar at dawn. Popeye Doyle, shaking down negroes in Bed-Stuy, Popeye Doyle, waiting outside the Westbury, Popeye Doyle, stripping a car in Dumbo. That’s not my Dad. My Dad was more like Harry Caul, Gene Hackman’s obsessive snoop in The Conversation, recording everything while remaining fundamentally inscrutable. Popeye Doyle is all scrutable: ecstatically surface, ecstatically macho. Hackman, a Method actor, here turned the Method on its head; rather than creating an illusion of interiority, in Popeye he created a character with no interior at all: rage, libido, America-first-ness. Not my Dad.

But it’s my Dad’s city, at the moment they separated, and perhaps that counts for more. The weirdest of my super-8 reels is shot on the East River one morning, just under the Manhattan Bridge. Cars are parked along the riverbank, a cherry-red Beetle up front, and you can see men standing there in the sunlight. Are they fishing? Cruising? What’s my Dad doing there? The camera cuts eastward, to the blue piers of the bridge itself, the East River lapping at their granite caps, and then westward, under an elevated stretch of the FDR, across South Street. Between some boarded-up warehouses and a rubble-strewn lot is a tiny, disreputable-looking brick shed, with a filthy, grated window and door and the word Dee’s painted over the lintel in Yankees-style cursive. It’s clearly a dive bar, clearly not long for this world, and when it first flickered by I imagined Popeye Doyle behind that façade, passed out at the bar.

Imagine my horror when I learned that that bar is located only half-a-block south. Horror at the aptness of my conjecture. Horror that the game I’m playing isn’t quite a game. Popeye’s not my Dad; my Dad’s the one holding the camera. But for all the footage he shot through his windshield, driving up 3rd Avenue and down Columbus, my Dad’s not Friedkin either: the film’s not sped up; he obeys traffic lights; avoids Brooklyn and elevated subways. In one reel, stopped at a red light on 86th and 3rd, Dad swings the camera west towards a movie marquee. They’re playing Loving and The Adventurers, which means it must be March, 1970. I’ll be born in five months. He must be driving home. They must still be together. There’s a lot to look forward to. Both movies are terrible. 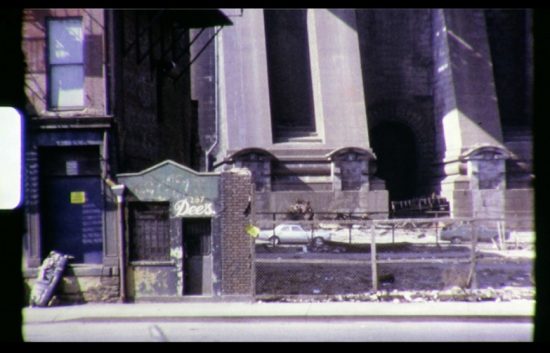