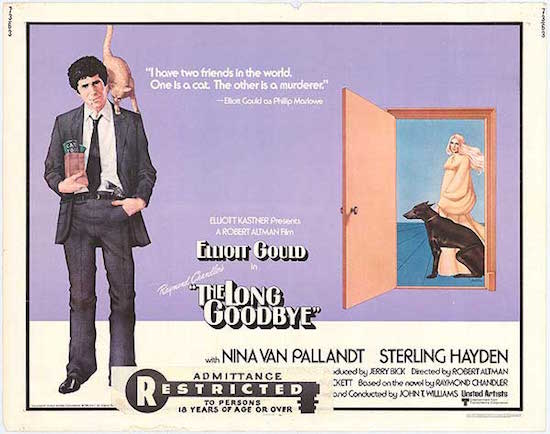 The first line of Altman’s movie is “Meow,” spoken by a hungry but finicky cat. As Marlowe (Elliott Gould) rises to meet the specific demands of the feline, he tells us it’s 3 a.m. and lights his first Camel, commencing a ceaseless cavalcade of smoking, just one of the signs pegging him to the past, foreshadowing his future. Marlowe’s out of his cat’s brand and has to leave the apartment. By the time he gets into his 1948 Lincoln Continental Cabriolet Convertible, we know he’s a guy with a code from prime-time noir, living in a town that’s moved on. He returns with the only cat food he can score — and, as no good deed goes unpunished in Tinseltown, the cat leaves in disgust.

The next 100 minutes are a succession of fickle, human-type cats — each of whom demands something from Marlowe. The first to arrive is Terry Lennox, failed actor turned bag-man and Marlowe’s second-best friend (after his cat). Lennox shows up asking for a ride to Tijuana where maybe he’s gonna cool his heels after a fight with his wife. When Marlowe returns from the border, cops are waiting to arrest him for abetting Lennox — who may have killed his wife, instead. Marlowe spends the rest of the movie trying to prove to himself that his pal didn’t do it.

As we approach each of his collisions with demand and disappointment, Marlowe repeats, “That’s OK with me.” His nonchalance, sardonic wit and cautious softness for the characters he encounters make him inviting in a way that other movie Marlowes aren’t. And this noir is more of a chiaroscuro, with dark spaces illuminated by flashes of light, by tonal shifts as punctuation. Marlowe’s mostly naked, pleasingly serene neighbors, the “yoga ladies,” are a chipper Greek Chorus.

The movie intros with a hot blast of Benny Goodman’s swinging, stinging “Hooray For Hollywood” over a close-up of a carved metal plaque, mostly in shadow, depicting palm trees, unfathomable roads and the word “Hollywood.” Altman was ever at odds with the place and what doesn’t actually describe it here is a direct poke at its clichés: “Nobody cares.” Lennox says. “Yeah, nobody cares but me.” Marlowe replies. “Well, that’s you, Marlowe. You’ll never learn. You’re a born loser,” Lennox responds. Altman’s film then takes the ultimate liberty with Chandler’s novel. In the penultimate scene, Marlowe joins the present by subverting his own code.

The last line of this movie is “Blam!,” spoken by a gun. Moments later, on his way down a tree-lined path in Mexico, Marlowe summons the joie to play the world’s tiniest harmonica. He then gently grabs an old lady and gives her a once-around twirl as the soundtrack recording from “Hollywood Hotel” replete with hiss and pops, repeats Benny Goodman’s opening song. As he bears away, Marlowe kicks up his heels. That’s OK with me.

Lisa Jane Persky is founding staff member of both the New York Rocker and the Los Angeles Review of Books. Her work as journalist, photographer and artist has appeared in Mojo, Vulture and The Pitchfork Review among others. Her fiction has appeared in BOMB and has been anthologized in Eclectica: Best Fiction Volume 1. Lisa is also an actress who has appeared on, off and off off Broadway. 30 years of her film and television work is listed on the IMDB. In her spare time she collects chickens found in literature at chickensinliterature.com and is writing a memoir of growing up Bohemian in the years between the Beat and the Blank Generations.