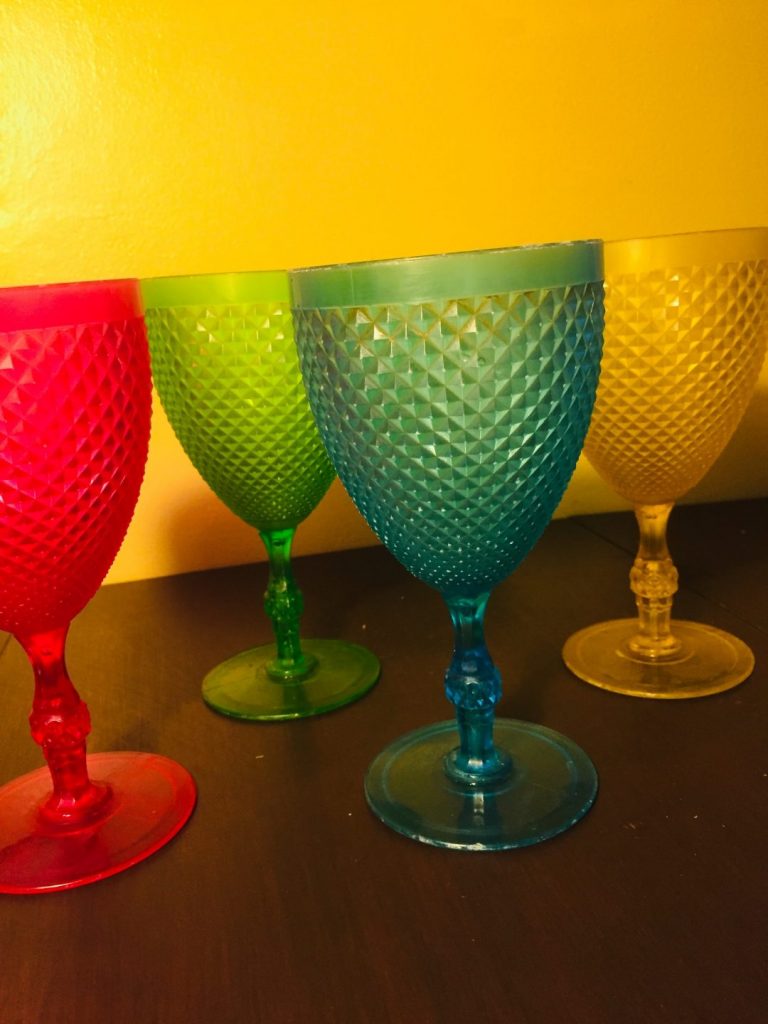 The Chalices are four plastic picnic glasses, designed to look like medieval goblets, with ornate stems and faceted bowls.

As objects whose plastic-ness makes fun of their ornate, aspirational form, they’re classic examples of kitsch. Their form is heavy, precious and portentous — but they’re light as air and indestructible.

Real kitsch displays these kinds of tensions innocently. The Chalices, on the other hand, are trying really hard to be kitsch, which probably excludes them from this club. I bought them in a homeware shop which is all about making domesticity into an ironic performance: elaborate pink feather dusters, tiered cake stands and napkins featuring great art.

But for me the Chalices have a kind of magic that’s not really about kitsch. There’s something more fantastical than ironic about their rainbow hues and unexpected lightness. When they’re set at table, they evoke for me a fairy banquet, bright and merry with lanterns and elven laughter.

Maybe the story behind the Chalices goes like this. The fairy folk liked to spy on the great halls of Kings and Queens where goblets were heavy as lead, jewel-encrusted, swilled from and thumped back down on the table with both hands. Laughing at this thuggery, they held their own mock banquets where iridescent copies of human utensils were spun out of thin air for sport.

This sense of unreality lends them to all kinds of imaginary games where kids are involved. My daughter and her friend like to make ‘water cocktails’ in them — basically water, ice cubes, cocktail parasols and lemon slices. The Chalices are alchemical, able to transmute water into any substance you like. (I also like to drink cold water from them. They are too light, both in matter and essence, for the heaviness of alcohol. They’re to be dipped into the icy water of a crystal brook — fairy champagne.)

Kids love the Chalices and fight over the colours. As they don’t read them as kitsch, they take their magic at face value: Disney come to life. My nephew even asked for a set of his own for his birthday. I couldn’t find him the exact set we have — but something even better: a light-up, colour-changing medieval goblet. Let the feasting begin!

See All Posts by Louise Jolly

Louise began her career as a copywriter and then gradually moved over to semiotics, although she still loves focusing on language. She lives in Brighton, on the south coast in the UK, where she is friends with several other local semioticians (Brighton is home to a disproportionate number).