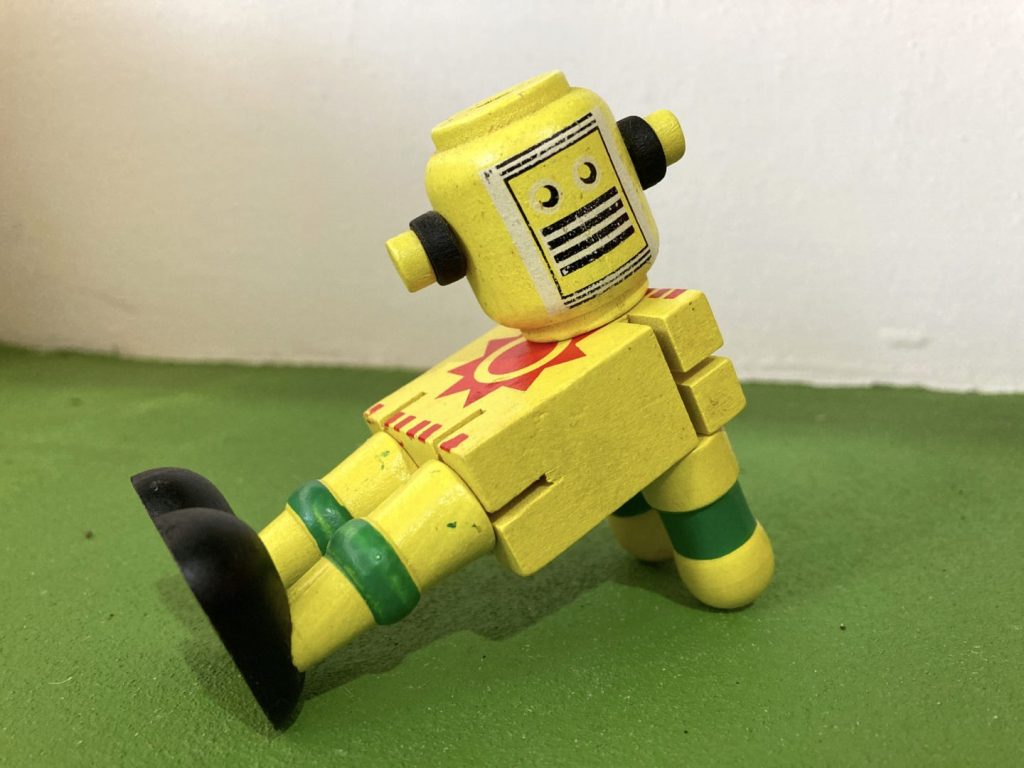 This wooden robot can move its head in four ways (in addition to the head’s original position); and it can move each of its limbs in three ways apiece (in addition to the limbs’ original positions). Certain of these movements make certain other movements impossible, yet still, according to my calculations — and paraphrasing Deleuze’s 1970 reading of Spinoza — we can confidently say that this robot has a thousand ways to “affect the world.”

I keep the robot on my desk, or take it along when I work elsewhere. Whenever I am not able to produce new ideas, I enjoy being able to find new movements and positions for the robot. In this way I not only relax, but also come to understand again that every problem has many aspects… and there are also innumerable possibilities to be creative. The robot’s yellow color, and the red sun emblem on its chest, suggest to me the power of creativity; its green parts, meanwhile, signify nature. It looks happy.

In his writing on Spinoza, Deleuze suggests that the “affection” of a body determines its power to affect and to be affected. Nonliving and living entities alike have affections – that is, instantaneous effects on other bodies. Nevertheless, only living organisms are able to experience such relations, which are affects that increase or decrease bodies’ power. How do affection and affect relate to human bodies’ power? Deleuze asks us to imagine ourselves in a dark room in two different situations: 1) meditating and 2) trying to find our glasses. When someone turns the light on, we experience the passage from one state to another:

Your whole body is in a kind of mobilization of itself, in order to adapt to this new state. The affect is what? It is the passage. The affection is the dark state and the lighted state… it is your body that makes the transition.

If you were meditating, you would be furious with the person who turned on the light. But if you were looking for your glasses, you would be very pleased. In the first case, you experience a decrease in lived power. In the second case, an increase. As such, the former state relates to sadness, the latter to joy.

This helps me explain the power of my wooden robot. It affects me in a positive way; it increases my creative power in joyful ways; it helps me to put on my creative glasses — and pass from a dark state to a light one.

See All Posts by Max Matus

Max Matus is a researcher at Mexico’s National Council of Science and Technology (CONACYT) and a research fellow at the College of the Northern Borderland (Colef) in Tijuana. He is also the research director of Semiosfera, an innovation consultancy firm based in Mexico City.