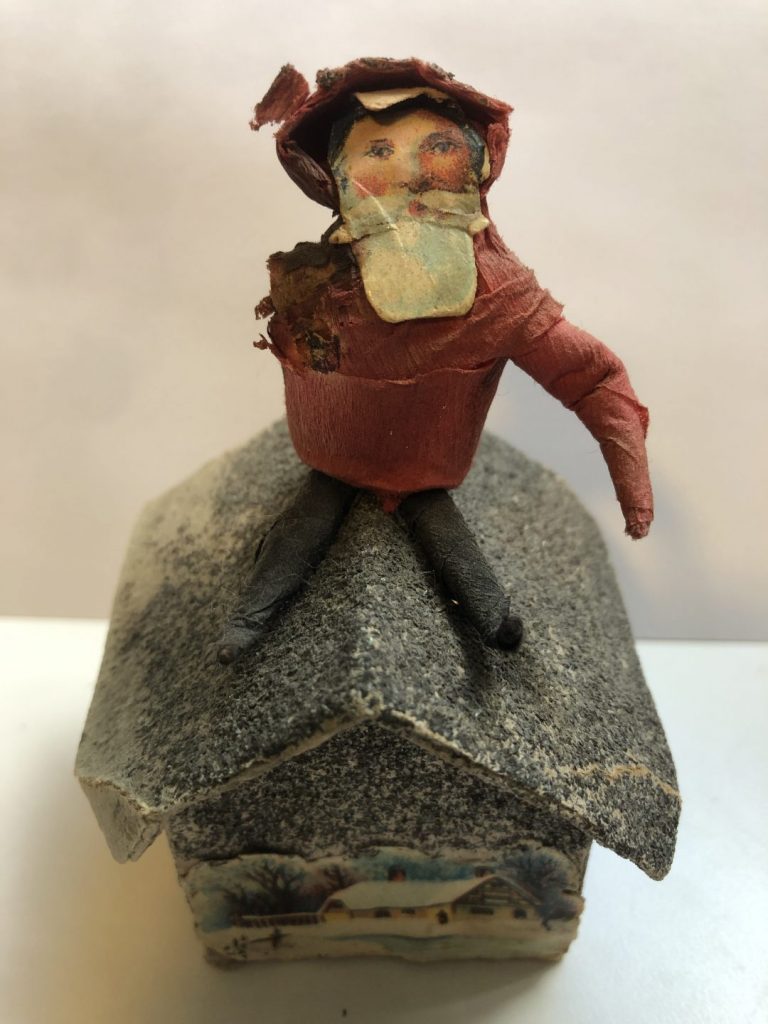 This is an old Christmas tree ornament that’s been in our family for generations: as best we can figure, it was obtained in Germany by my great-grandmother over 100 years ago. It depicts Father Christmas (not ‘Santa Claus’) on a rooftop, presumably in a quiet moment before chimney descent.

It’s merely cardboard, tissue paper and glitter, but it carries a massive sentimental weight, as it became the lightning-rod of a terrible legal battle between me (supported by my siblings) and my estranged stepmother before becoming the holiday-season manifestation of the memory of my late father.

My father Hugo passed away in 2000 after a fairly short but vicious battle with brain cancer. For the second, final round I came back from grad school in Australia to help manage the process: my stepmother (whom we were always happy to tolerate) was never the most stable person and my father’s fatal illness unhinged her completely.

My father’s will specified some important family heirlooms as ours, but a large number of things with nominal monetary but high emotional value were not identified for us, so they passed to my stepmother as ‘estate’. But she had behaved unforgivably during his illness and we knew we were never going to maintain even a civil relationship with her after Hugo’s death; we also knew that many of the family heirlooms she now possessed meant nothing to her financially or emotionally: she had not been his wife for that long, or been embedded in the family during her short tenure in any meaningful way.

So, we fought her legally for these items. Of all of them, the Father Christmas tree ornament was the visual symbol of this battle: it became the shorthand icon to represent our goal, clawing back precious family heirlooms for future generations, to keep them in the family to which they properly belonged. At the time I was the last of his line; I had sole responsibility for any legacy he might have.

In the end, we won — as we knew, the objects we wanted meant nothing to her, and so as the vindictive legal volleys went back and forth, we believe she realized our emotional resources and will to fight far, far outclassed her lack of personal attachment to the items. What would she want with a stupid, dented, damaged cardboard ornament of Father Christmas? Missing an arm, for god’s sake? Its very banality and shoddiness — the sheer size of the disproportion between signifier and signified — is what made it the perfect distillation of our fight.

These days, the Father Christmas ornament always takes pride of place on our Christmas tree. My wife and I have very different approaches to tree decorating: my family always liked to cover the tree with individual, richly-signified, curated ornaments; my wife prefers a more designed approach following a specific chromatic scheme. I’m now resigned to her approach, but the Father Christmas ornament is always carefully and proudly placed as a mini-shrine to my late father’s memory.

See All Posts by Charles Leech

Charles Leech is a qualitative market researcher at ABM Research in Toronto, where he’s helped provide deeper consumer insight to a wide range of global consumer brands for 20 years. His PhD in applied semiotics, from QUT in Brisbane, was a defence of pop culture postmodernism through the lens of recontextualized film music.