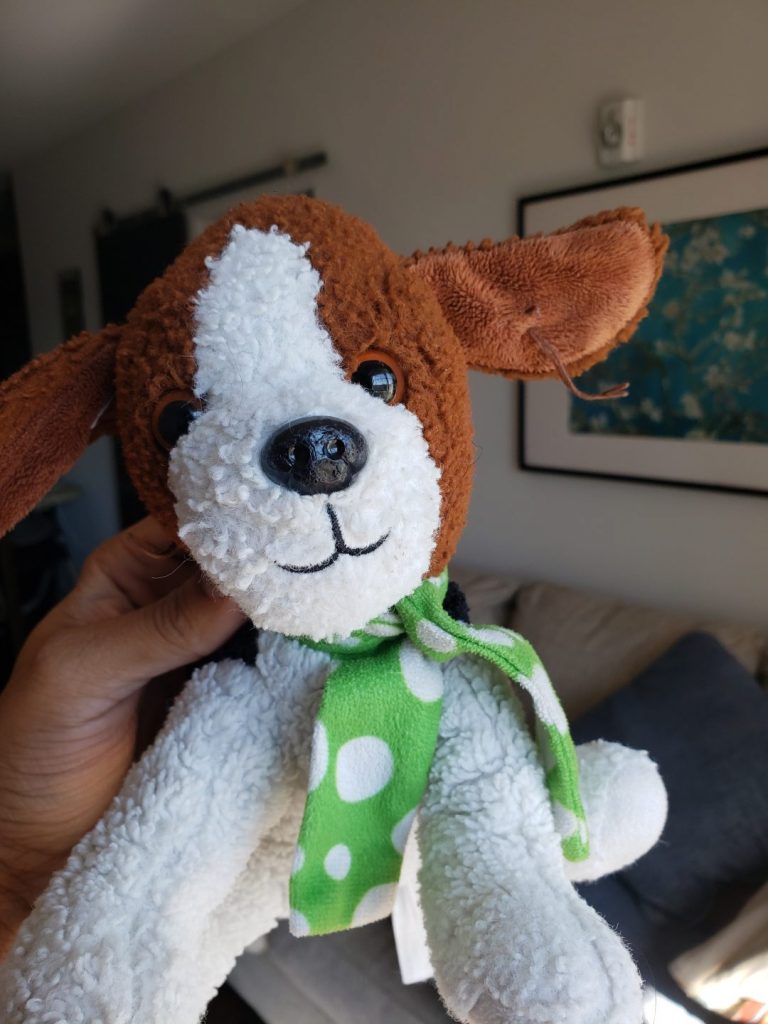 My parents picked up Bingo at a Mumbai department store, and my toddler – then on her first trip to India – having pronounced him “a boy,” took to the stuffed toy right away. Back home in NJ she carried him everywhere, barked in his imagined voice, and manhandled him cheerfully. We would toss him back and forth – ‘the catch game.’ I could see why she adored him: his thready smile was warm; it was like he could return her love. The polka-dotted scarf around his neck struck me as rakish, Eastern European. He had spirit. I thought he resembled Snowy from the Tintin comics.

Bingo was the only plaything my daughter wanted to take on vacation the next year. There’s a photo of her hugging him as she clings to her mother at a wedding party in Oxford. A video of her holding him by the scruff of the neck and toddling after pigeons in Copenhagen’s City Hall Square. In Gothenburg, our friends’ daughter had her own toy puppy, Max. From the squeals in the backyard, you could tell Bingo got along with Max.

A couple of days later, in the taxi to the airport, we suddenly realized Bingo was missing. We ransacked the moving cab like cops searching for drugs. Rummaging through the suitcase before check-in yielded nothing.

The poor girl didn’t even whine. It’s hard to gauge who feels worse – parents or child – when the kid says in a small voice, ‘Bingo?’

We swiped through photos desperately trying to place where we had last seen him. Without Wi-Fi, we couldn’t contact our Swedish hosts until we reached our hotel in Berlin, which is when we finally found out: Bingo was still sunning himself in their backyard.

Bingo, the passport-less pup, made his way back to us a few months later by ship. He was that year’s Christmas stocking surprise. For weeks, I invented stories as I put my daughter to sleep: Bingo takes the U-Bahn, Bingo chases bandits in Algiers, Bingo spells ‘Ljubljana.’

You’d think that kind of caper would be enough to send a stuffed toy into retirement. But a few months ago, on a walk around the lake behind our home, we lost Bingo again.

Halfway through the search, things appeared bleak. What an anticlimax, I thought, scanning the road. We get him back after mislaying him a continent away, and then lose him forever twenty minutes from home.

I was growing rather miserable when I heard the outsized yelp and a scream: “BINGO!”

Some kind soul had propped him up on a large stone by the side of the road; while I’d missed him completely, my pint-sized Pinkerton had – against the odds – located the pup.

I don’t know how long we’ve got before she starts to forget. Already she confuses memories of video bits and photographs with remembrances. But every other night, my daughter cuddles up to me and says: “Do you remember when Bingo got lost and we found him together?”

“Yes I do, my love,” I say, “but you found him all by yourself, and I am so proud of you, my little detective.”

See All Posts by Vijay Parthasarathy

Vijay Parthasarathy is a cultural strategy consultant and writer. His essays have appeared in Campaign Asia, OPEN magazine and Guernica. He holds a PhD from UT Austin in the area of globalization theory and a MA in Creative Writing from the University of East Anglia.