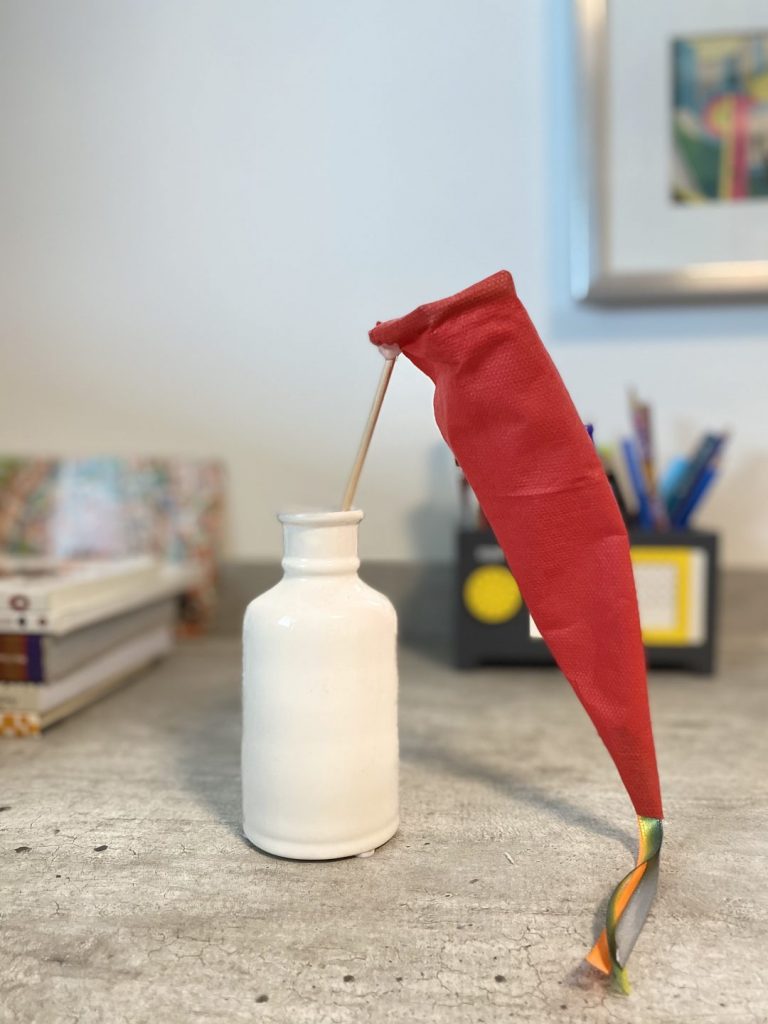 What could be more maternal than collecting memorabilia from a child’s early years at school? Naturally, as a mother of two, I keep a huge box filled with cards, artwork and other cute things. Among these items, there is one particular little gadget that has a unique twist.

It was the end of an ordinary third grade afternoon, in those innocent days when almost any class might have the ability to bring a moment of “aha” and Sofia climbed into the car with a mini windsock that she had just made in her science class. A piece of sticks, straws and a red non-woven textile decorated with colourful ribbons. She offered it to me as a gift, meant to be added to the contents of my famous mommy-box-of-school- keepsakes. Her eyes were so alight with anxiousness as she described the marvels of that little stick that held up an odd little cone, seeming half a butterfly catcher, half a Santa’s hat. What had fascinated her was the fact of the wind — that invisible breath — could made itself tangible through a simple piece of cloth whose movement make pilots sure of where to land.

I made all the faces of an attentive mother, thanked her profusely for the gift and, before I could put the mini windsock away in the box, I realized that I had just received a sort of Woody (Toy Story’s hero): an object of somewhat superior status that it would be placed atop my all but elegant freelancer’s desk. And for a semiotician’s reason.

Peirce would say that my mini windsock was a legitimate replica of a dicent sinsign, reproducing the indexical representation of the direction of the wind in its purest secondness (enough to give an academic the chills!). Nonetheless, it might better serve instead as a metaphor for our condition as commercial semioticians — a symbol of how we map out the direction and speed of the winds of change, their dominant and emerging forces, without offering some ultra-technical or millimetric quantitative data, yet providing excellent parameters for a safe brand’s landing.

And this ultra-signifying albeit ordinary object has also some interesting trivia about naming:

If for Anglo-Saxons, it is the sock that is worn on the feet of the wind, for the Spanish and the Portuguese it is the sleeve of an invisible power, and for the Germans a sack that keeps the air orderly.

For Brazilians, it is none of the above! In our all-but-classical way of naming things, we strip ourselves of all wearable (and almost poetic) associations with socks, sleeves and sacks and simply award the object the name “biruta”: a term that has also a colloquial connotation for restless weirdos and eccentric (plus) uncanny folks. After all, someone able to capture the shifting of winds in such singular manner can only be outside the box!

See All Posts by Mariane Cara

Mariane Cara is a Brazilian semiotician and cultural strategist with degrees in Communication and Semiotics. Passionate for the meaningful signs of the absolutely ordinary, she divides her time between cultural reports on a vast range of categories and market niches and the adventure of being a mother to daughters Sofia and Elisa.