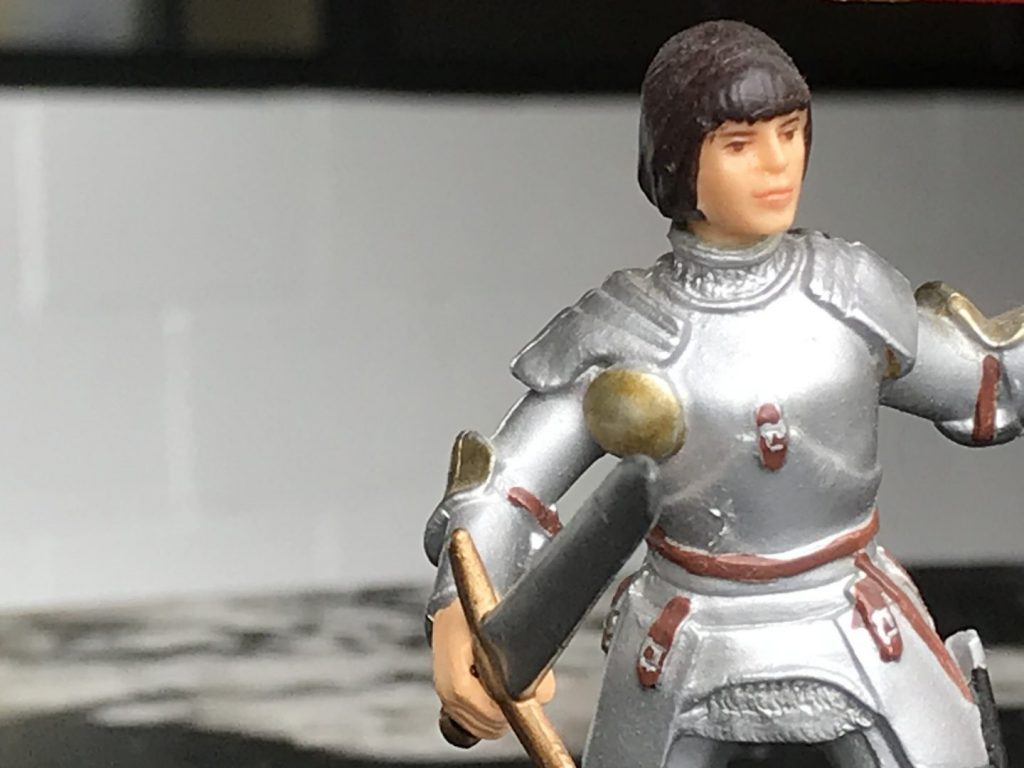 I am eight or nine. I am watching Saturday morning cartoons, interspersed with “educational” shorts depicting critical moments of — mostly American — history. (I am Canadian, I am already used to most of my content having this lens). I see one short about a young peasant girl. She hears voices telling her to save France. She dresses up as a boy. She goes to the French court. She immediately identifies the king from a room of courtiers. She rides into battle. She is badass (although, in those days, badass was not a term anyone used). She is a character from the feminist fairy-tales my hippie parents got me, but she is real. She is burned at the stake. That part is not so good, but I am hooked.

I am fifteen. I am preparing for my audition to a drama school. (Keanu Reeves also went there. What should that tell me?). I memorize a monologue from Saint Joan: “Light your fire! Do you think I dread it as much as the life of a rat in a hole? My voices were right!” (I do not have to look this up today). I fondly believe I have a unique relationship to this role. I do not realize I am a drama teen cliché.

I am seventeen. I am in English class. Another girl is presenting her analysis of “Joan of Arc” by Leonard Cohen. Of course I know and love this song. Of course I know and love Leonard Cohen. I am a teenage would-be beatnik. The other girl says Joan is tired of the war and wants to go home. I contribute that the poem is a metaphor for female desire. The girl looks at me, bewildered. The class looks at me disdainfully. I burn with shame but also righteousness: isn’t it obvious? And yet, clearly the others think that I am twisted. “It’s there,” the teacher reassures me quietly. But I am only partly reassured.

I am eighteen. I go to McGill, in Montreal, home of Leonard Cohen. I don’t think much about Joan of Arc but we all think about Leonard, all the time.

I am thirty. I go to the Loire Valley with a group of friends. All the other tourists are either senior citizens or school children. We say we are the youngest old people or the oldest young people in The Loire. I wanted to go to the Loire because it has chateaux, but also because it is Joan of Arc country. I take my friends through a guided tour of chateaux associated with Joan. We start at the castle where she first met the Dauphin. The throne room is the size of a suburban rec room. We imagine Joan and the Dauphin. We think about history and mythology.

Somewhere on this trip I found this plastic figurine. It looks like it was made in Japan. It is a mini action figure. It is kind of badass, although it does not stand up very well. It sits on my bookcase.

See All Posts by Sarah Johnson

Sarah Johnson is a commercial semiotician who has conducted studies ranging from Obesity in American Media and Popular Culture to an Historical Analysis of Ritz Cracker Advertising. After 15 years in Advertising Account Planning in the UK, US and Canada, she founded Athena Brand Wisdom, which offers marketing research for Brand Communications. Sarah studied Anthropology, Philosophy and English at McGill University and English Literature at Cambridge.