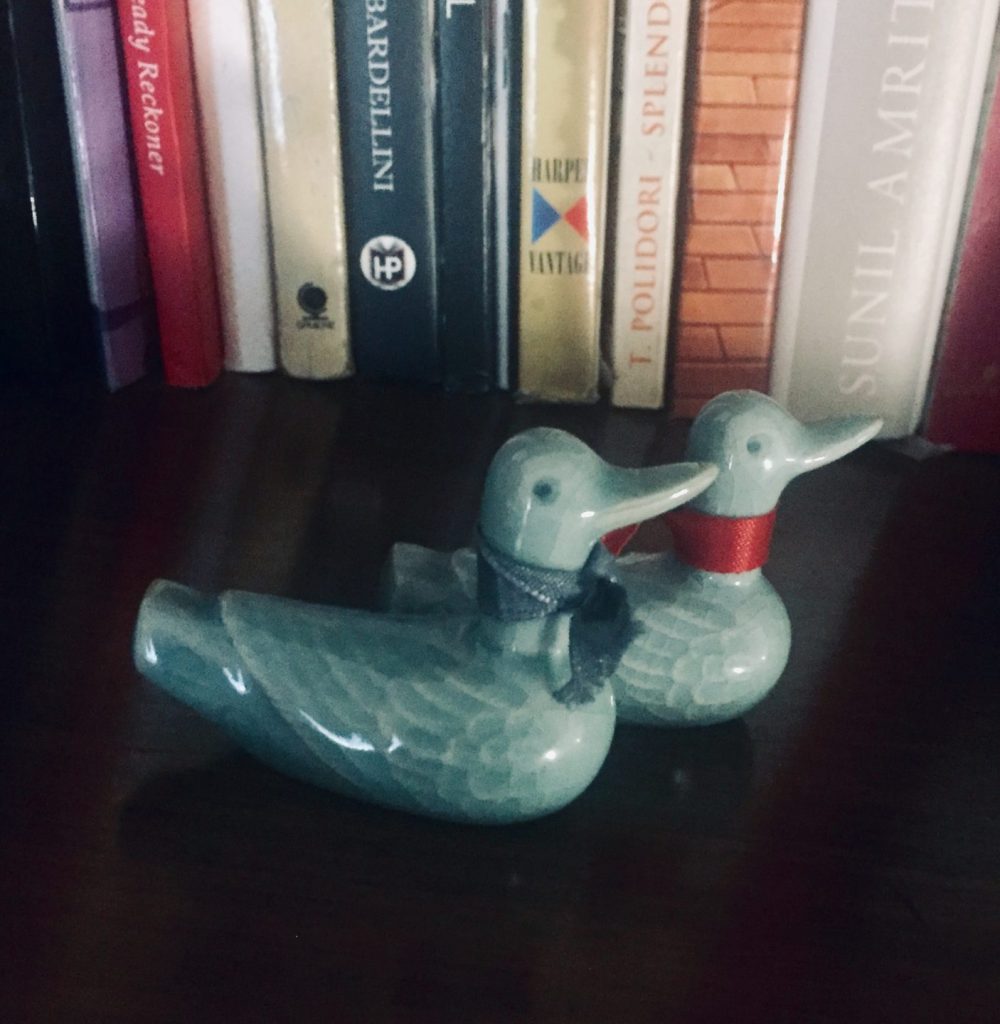 When traveling to South Korea, I was smitten by the elegance of celadon ceramics. A surviving example of traditional Korean craftsmanship from the Goryeo period (10th-11th century), its transparent blue-green colour and subtle cracks make this “greenware” uniquely fine and exquisite. Throughout my trip I searched for a celadon piece to bring home — one that was neither too fragile nor too expensive. But sadly, no luck.

At the airport, however, my eyes fell on the two little ducks humbly sitting on a shelf. It was love at first sight: the miniature form, the understated beauty of celadon green, this was Korean greenware in all its subtlety, without frills or fancy. Beautiful things surely come in small packages. Thrilled with my find, I instantly, said yes to my two green ducks.

Having paid for the ducks, I started to remove the ribbons around their necks: blue for one, red for the other. These sublime pieces didn’t need any further decoration, I thought. However, the shopkeeper stopped me urgently — which took me by surprise. We both spoke English, so we were able to strike up a conversation in which I was enlightened about the ducks.

Mandarin ducks, a species once widespread in East Asia, are believed to be the only duck species to mate for life. For this reason, mandarins are a symbol of fidelity and deep love in Korean culture, and paired duck figurines like the ones I’d just purchased are used in wedding ceremonies and given as marriage gifts. The blue ribbon signifies a male duck, the shopkeeper explained, and the red ribbon a female; the ribbons weren’t merely decorative. I was fascinated by the shopkeeper’s stories about Korean life and symbolism; if it hadn’t been for my boarding call, I would have spoken with him for much longer. This simple object had enriched my perspective.

The two ducks now sit on my bookshelf in tranquil beauty, no longer merely a celadon curio but a symbol of love and commitment. My favourite part of this tradition is that the position of the ducks signifies their relationship status: when they’re facing beak-to-beak, it signifies harmony, but when they’re facing away from each other, it’s a tiff! As I watch my ducks shift positions on the shelf, their story continues in my head.

See All Posts by Aiyana Gunjan